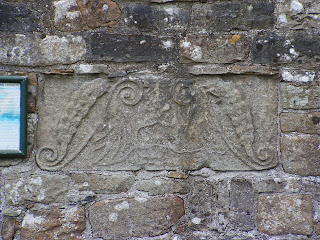 They say that a picture is worth a thousand words. 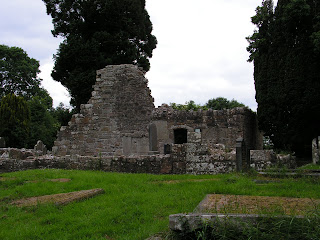 That being said, the pictures you see here mean little if you don't know the story that goes with them. 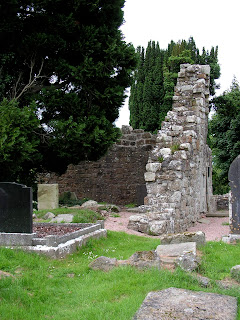 These photographs are from the cemetery and church at Aghalurcher.  The Medieval Church ruins stand on an the ruins of an even older site associated with St Ronan in the 7th century and was the "home parish" of many of the Maguire clan from County Fermanagh in Northern Ireland.  All sorts of folks are buried here, including some of the Maguire chieftans from the Irish Middle Ages and at least one Maguire Bishop.  There are some very, very old gravestones here, along with the church, and some stone work on the gatepost, including a crucifixion scene. 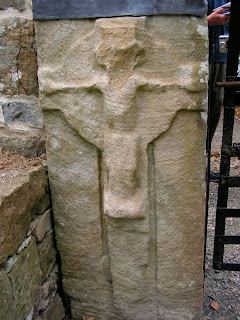 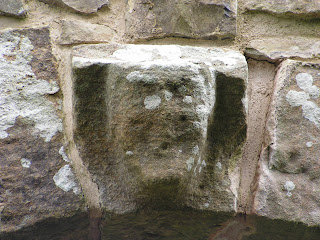 We visited this place a few years ago, after learning about it at the exhibit about the Maguires at the castle in Enniskillen, which we visited because we consider it our "ancestral family castle."  My grandmother was a Maguire.  Her grandfather came to Georgia in the early 1800's from Ireland.  Whether we are related to any of these Maguires or not is moot.  It's our ancestral family castle, as far as we are concerned.  (How often does one get to claim a family castle, after all?) When we found out about the church and cemetery and its great antiquity, we decided to pay our respects.


Aghalurcher is not easy to find.  One drives out of Enniskillen and over to Maguires Bridge and then through what looks like someone's yard and down a dirt road or three and on several other unnamed streets and then parks beside a pasture.  (Now I suppose one can use a GPS or Google earth; when we visited in 2005, we didn't have access to those things are were frankly surprised when we actually arrived at our destination.)  It seems that the church - once the Maguire Royal Church, for the Maguires were the kings of Fermanagh - was pretty much abandoned in the mid-fifteenth century because it was felt to be cursed. 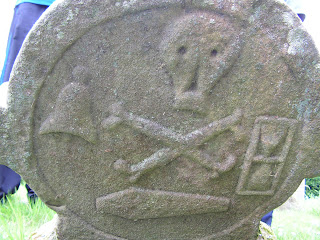 The curse came about because of a couple (or more) of murders that took place there.  It seems that a man named Gilla Patrick Maguire was murdered at the high altar of the church in 1484 by his five brothers.  And then one of those brothers, Don (who may have been the "point man" so to speak) was murdered in the church's doorway by his uncle and some cousins on the other side of the family in 1486.  Don and Gilla-Patrick's grandfather Thomas was one of the Lords (i.e., kings) of Fermanagh, and his brother Donaugh-Dunchadha was maimed at the cemetery/church as well.  (A section of the family tree is here.)  There was a senior branch and a junior branch, and historians can't seem to decide if the Maguires were a great at keeping the peace or a family prone to slaughtering one another.  In the ancient annals of Ireland, there was a fair amount of internecine warfare between and among families or clans. 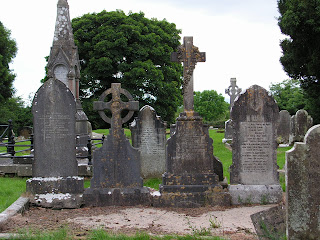 Some speculate that the folks who were murdered had come to the church in order to seek sanctuary.  It seems that they did not find it, except for the rest found in death - they do now lie down in green pastures, somewhere.  But the fact of murders at or near the altar (Thomas a Becket notwithstanding) served to desecrate the church, and so it was abandoned, although the cemetery remained active for centuries.

Well, that's a sad story, isn't it?  I'm wondering if these were my ancestors.  We all have these stories in our past that we don't want to own.... and yet we are freed when we do own them.  Who knows what the story truly was about these folks who fought with swords on the church grounds and even at the altar?  Who knows what their treachery was founded upon?  And whether or not they are my direct ancestors, truly and sadly this is the history of humankind.  It's rather like the story of Cain and Abel. 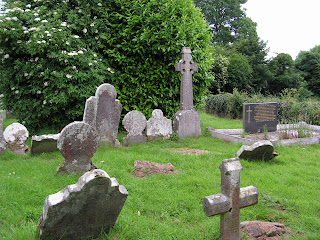 The thing is, though, even if people stopped worshipping in that little stone church, God didn't leave it.  (When Cain slew Abel, God was still there.)  The grounds are sacred; the people prayed in that church for centuries and their prayers are still in the stones.  There must have been prayers for peace among such a family; there must be many tears that have seeped into the floors as well as the blood and the waters of baptism.  The church was the center of at least part of the family's world.  It surely included baptisms and Holy Eucharist and confessions and absolutions and marriages as well as treachery and death.

And now, 'tis a quiet place full of odd-looking headstones that look like they must mark pirate graves with their skulls and crossbones and bells and hourglasses and ancient rocks that just lay strewn around in silent witness, never yielding their stories.  May they all rest in peace. 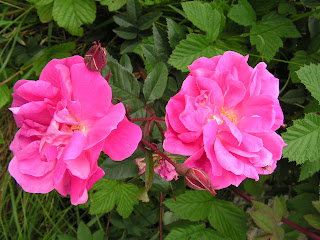 Ray Barnes said…
What a fascinating 'pocket history' Penny. As you say the prayers, marriages, christenings etc help to balance the rather more gruesome side. No doubt we all have mixed blessings as far as ancestry is concerned.
Lovely pictures by the way.
March 17, 2011 at 10:54 AM

Penelopepiscopal said…
Thanks, Patti - and hope you're having a wonderful feast day yourself!
March 17, 2011 at 12:05 PM