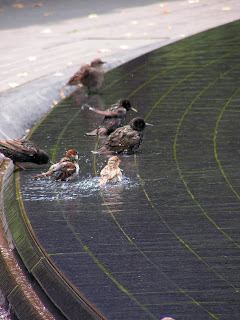 When I was a child, one of the fun things to do in the summer was to put on your bathing suit and run around in the yard while the sprinkler was "watering the grass."  We didn't have water restrictions then (in fact, our water came from our well) and on a hot day, we could play outside even in sweltering heat.  Since the house wasn't air conditioned then, it was sweltering inside, too.  Much more fun to be outside, running off energy, getting just wet enough to stay cool.

The best kind of sprinkler was the one that shot many tiny jets up into a fan-shaped arc that gently waved back and forth.  Since the base was on the ground, you could jump over it as the aluminum bar slowly tracked through its not-quite-180 degree path, and the fine spray didn't threaten to put your eye out the way the oscillating sprinkler on the pole did.  Although I liked better the hissing/ratcheting sound the sprinkler on the pole made.

The best thing was to go to the pool, of course, and when I was older that's what I often did, but little kids can play in the sprinkler while Mom or Dad accomplish some other things around the house or yard.  Going to the pool meant (for the parent) not doing much of anything else during the day, until we were big enough to be dropped off.  The think I remember most about the pool from my very young days was how I stayed in the water until my lips were blue and how I'd get wrapped in a big warm towel until I stopped shivering.

I like to be around water.  Even now, I don't mind the time spent watering the plants in the yard (on the proper days of course, now that we do have watering restrictions).  I like to hear the sound of it and smell it and rinse off my hands with the hose.  I don't use a sprinkler but water by hand so that most of the water gets to the roots of the plants.  And mostly I just water those plants in planters - the stuff in the ground needs less attention.  And I keep the birdbath full.

Occasionally I'll be visited by a hummingbird while watering.  They are attracted to the sound and will fly through the spray if I provide it for them.  Here the hummingbirds only pass through twice a year - they aren't resident - and so the best time to see them is late summer when they stay for a few weeks, feeding heavily for the trip south for the winter.  The first time I was visited by a hummingbird while I was watering (many years ago when my garden was new and I needed to water more often as the plants were getting established), we were both rather surprised.  It was early morning and I was sleepy; the buzzing sound at first just barely registered, and then the bird itself flew through the arc of water from the hose a few inches from where I was standing.  I started.  It flew away.  But for several mornings after that, it appeared both to enjoy my flowers and to play in the sprinkler.

Ray Barnes said…
They sound lovely. We don't have them in this country alas.
Somehow a large noisy magpie grabbing two or three lumps of bread at a time and 'dunking' it in the bird-bath before flying off doesn't have quite the same appeal.
May 26, 2011 at 5:57 PM

Penelopepiscopal said…
Ha ha, Ray, dunking bread for the magpies most definitely doesn't have the same appeal as the graceful hummer in the hose spray. But magpies are in their own way interesting birds, aren't they? Aren't they considered really intelligent and can recognize themselves in mirrors and such? You could set up a magpie beauty shop in your yard for them!
May 26, 2011 at 10:08 PM