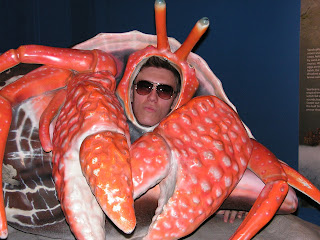 I have a small statue of St Monnica, the mother of St Augustine of Hippo, whose feast day is today.  It doesn't photograph well, so this is not (obviously) a picture of it.  My elder son gave me the statue for Christmas one year recently.  The card I got with the statue says that St Monnica is the Patron Saint of Mothers of Difficult Children.  The statue features Monnica holding a cup of the tears she wept for her son.

You may remember that Augustine was a bit of a pleasure hog before he became a Christian.  He lived with a woman out of wedlock and had a son with her, and he experimented around with different religions.  To be honest, other than the fact that his principal "different religion" was Manichean, which I think is pretty much a dead religion now, Augustine sounds like a lot of people we know.  But his mom wished for him to be a Christian and prayed for him for a long, long time.

The day that my son bought this statue for me, he and his brother drove over to the Cathedral Bookstore where, they figured (rightly) there would be lots of stuff to choose from that they could be sure I would like.  As it turns out, they told the bookstore manager (to whom I am well known, due to my dropping in on a regular basis) who they were, and that they were buying a present for me.  She told me later that she was so impressed with my boys (who wouldn't be?) and that the elder one told her wryly that a statue of the patron saints of mothers of difficult children was just what he thought he needed to give me that year.  I think she gave him a discount.

Like any mother, I've wept a few tears for my children.  I'd never describe my children as difficult, but there have been some tears.  I wept a few when I opened the box and read the card, in fact.  I'm pretty sure they've cried a few, too.  But we all have difficulties in life, because being in relationship, being embedded in a family, means that we will run into one another's rough edges, we will find ourselves trying to direct things we need not direct, we will disappoint and be disappointed.

But today, here's to mothers who weep over their children, for sadness, for fear, for disappointment, for pride and joy.

stpatti said…
A lovely thought coming into Mother's Day. I've certainly wept many tears of desparation & joy over my sons & our relationships! Praise be to God!
May 4, 2011 at 11:31 PM