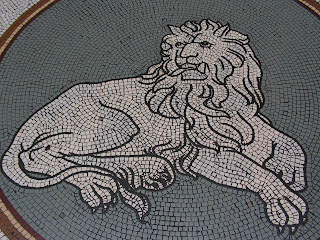 We celebrate the feast of St Mark the Evangelist today.  St Mark's day is normally April 25 and so it was transferred to today because April 25 this year was reserved for observation of Monday in Easter Week.


The symbol for St Mark, the Evangelist, is the winged lion; here is a rendering of that creature from the Book of Kells (click here).  The Gospel of Mark is considered to be the earliest of the Gospels to have been written, and it appears to have had a new ending (or endings) added on.  The original manuscript ended with the women having been met at the empty tomb by the young man dressed in white and told that Jesus has been raised and that they should go and tell Peter and the other disciples that Jesus is going to Galilee and will meet them there.  The last verse says, "So they went out and fled from the tomb, for terror and amazement had seized them; and they said nothing to anyone, for they were afraid."  (NRSV)

I always liked that ending (for one thing, it leaves out the part about the snake handling).  It puts us into the story to complete it ourselves.   It makes the story real to me - of course the women would flee in terror!  And of course we know that eventually they did tell, for the rest is history as they say.  One additional verse suggests that Mary Magdalene tried to tell but the disciples would not believe her, and yet another says that Jesus appeared to two disciples walking in the country (echoing the story of the appearance on the road to Emmaus from Luke), but the others wouldn't believe them, either.  Perhaps this is a diss of the women (let's just say they didn't tell rather than that we didn't believe).  Who knows?  Much about our faith deals in mystery; let the ending of Mark be a mystery, too.

This is the Old Testament reading for today, from Isaiah.  It's one of my favorite passages in all of scripture.  If you're in a place where you won't get funny looks from people nearby, read it aloud and hear the beauty and fabulousness of this reading.  It especially resonates with me today on a day in which death, but not peace, is being announced.

How beautiful upon the mountains
are the feet of the messenger who announces peace,
who brings good news,
who announces salvation,
who says to Zion, "Your God reigns."
Listen! Your sentinels lift up their voices,
together they sing for joy;
for in plain sight they see
the return of the LORD to Zion.
Break forth together into singing,
you ruins of Jerusalem;
for the LORD has comforted his people,
he has redeemed Jerusalem.
The LORD has bared his holy arm
before the eyes of all the nations;
and all the ends of the earth shall see
the salvation of our God.
(NRSV)

Ray Barnes said…
Yes Penny, it does benefit from being read aloud. One of the few benefits of living alone is that you can read aloud,talk to yourself whatever, without as they say 'let or hindrance'

I love the illustration from the Book of Kells too. What a fabulous work of art that must be.

Penelopepiscopal said…
Ray, you should travel to Dublin to see the Book of Kells at Trinity College. While the book itself is in a case and you only get to see a couple of pages, the exhibit outside the book room is very good and has many of the illustrations enlarged. Among my favorites are some people wearing checkboard leggings.
May 2, 2011 at 6:29 PM