A sad day in court 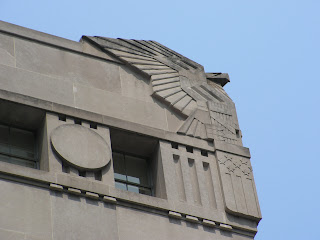 Recently, I spent a half day at the juvenile court.  My son and one of his friends were robbed some weeks ago by a group of teenagers.  An adult "good samaritan" had happened to drive by as the crime was being committed, and he broke it all up and caught one of the perpetrators, who was the only defendant in the hearing.  We went downtown for the hearing and the "good samaritan" came to testify as a witness as well.

(My son and his friend were not seriously injured, but the experience shook them up.  The hearing, and their duty to testify in court, was also an experience that made a deep impression on them.  They realized that while they were victims of a crime, their actions in court also meant that the defendant, who is only fifteen, a year younger than they are and who was not the ringleader of the group that attacked them but who refused to implicate the others, will be incarcerated for several years.  And they did not rejoice in that.  They understood the difference in their lives and the life of the defendant as well as the similarities.  They understood the connection we all have with one another in our society and how actions and reactions, actions and consequences, are interwoven and sometimes murky.  I was moved by their compassion.)

As with many court proceedings of this type, we had some time to sit around and wait in a couple of different waiting areas.  Upon arrival, we were directed into a large waiting area to sign in.  I noticed a couple of children's sized tables and chairs in addition to the adult seating.  Those little chairs and tables, which I am glad to say were empty, made me sad.  Later in the day, after the hearing was concluded and we went downstairs to another area to finish up the paper work, we were ushered into another waiting room, and this one included a toddler play area with a couple of stuffed animals and several large manipulative toys such as an abacus, interlocking gears, and bead mazes.

On the one hand, I am glad that attention is being paid to the fact that little kids have to come along and hang around at juvenile court.  When my children were babies, it was hard enough to get public places to acknowledge that we needed baby changing areas in restaurants and stores.  It is good that the courts recognize that little kids are present and that age appropriate seating and activities are being provided.  It is good that the system recognizes that kids come with families and that a problem with one family member may well signal problems with others and that all ought to be involved in whatever proceedings take place.

On the other hand, it is so sad to see that the juvenile court is frequented by little children - little brothers and little sisters of kids who are going through the system; some are even sons or daughters of offenders themselves.

Another common sight at the juvenile court are notices on bulletin boards and walls that say things like, "Are you worried about someone having an alcohol problem?" (with some explanatory text and instructions on how to call Al-Anon or Alateen) or "Hitting women and children is NOT traditional" (with information disputing claims that domestic violence is acceptable in Native American culture and, again, how to get help) and charts explaining what domestic violence is next to the cards of attorneys and social workers who are trained and ready to help victims of domestic abuse.

Again, I am glad that these signs and notices and posters are there.  My own son asked me about the drinking one, as he wasn't sure what it was about; we had a short discussion about co-dependence, enabling, covering up someone's drinking which keeps them from suffering the consequences of their behavior, and the 12-step programs that help them refocus on their own lives instead of the addicts' lives.  I imagine that others for whom the question is relevant may see it and seek help, and I am glad.  I am glad that someone realizes that people who are hanging around at juvenile court may be part of families that have been or are being destroyed by addiction and abuse and doing something to publicize programs and people who want to help.

But I was, overall, just sad.  Sad that a fifteen year old kid was in front of a judge after his seventh arrest.  Sad that his mother sat beside him, completely surprised at what she was hearing.  Sad that little kids spend the day at court with their families instead of playing outside or at preschool.  Sad that children don't know that they don't have to protect their addicted parents, sad that children don't have parents who will protect them.  Sad to look at the facts about domestic abuse: to see that one in four women is sexually abused and that nearly forty percent of all women who come into emergency rooms are there because they have been battered by their partners.  Sad to see that a woman who stays with her batterer is abused at least seven times each year, to see that a woman is in the most danger at the time just after she leaves the batterer.

These societal problems are so large, and so complex, and so difficult to even understand, much less to figure out how to address.  Most of us are at best unsure what we even think about family systems that have become so toxic; do we blame the mother, the father, society at large?  How do we reconcile the need for accountability, a desire for justice, with a love of mercy?  Do we need someone to blame so that we don't need to take into account the fact that we are all caught up in a web of exploitation and degradation, so that we don't have to see people who are hanging around at the juvenile court and detention center as part of the fabric of our own community and society?

And since this is an Easter reflection, where does the resurrection fit in to this scenario?   Where is the redemption, forgiveness, transformation, reconciliation?  When we say we want justice, are we just talking about punishment?

Big questions with no answers.  But much to ponder, and although I am no stranger to the world of those people who live on the margins, I am sure these images from the juvenile court will stay with me for a long time.

Anonymous said…
Sorry that you and your family have had to go threw such an ordeal and hopefully, in time, your son can put it behind him. In court etc we see how so many others live/struggle through their day to day existence but thank God for so many wonderful charities/organizations/churches that help folk get through. Take care, Judyx
May 20, 2011 at 2:48 PM

Penelopepiscopal said…
Thanks, Judy - not really an ordeal but certainly a chance to see what many people deal with on a daily basis. And great appreciation for the guy who stopped to help.
May 20, 2011 at 3:24 PM

June Butler said…
Penny, your son and his friend showed quite a bit of maturity, and I'm sure they matured further through their experience in court. That they understood the gravity of the situation and felt compassion for the boy involved, in spite of everything, speaks well for them.
May 20, 2011 at 5:34 PM

Penelopepiscopal said…
Yes, Mimi, they are and it does. We think kids can't understand these kinds of complexities but they often understand them better than we do, I think. Especially when it comes to "society," which they experience in a much different way in their intown public high school than most of us do in our more homogeneous circles.
May 20, 2011 at 5:46 PM

Penelopepiscopal said…
Update - the good samaritan is working with the prosecutor to work with the defendant and his family between now and sentencing date, in hopes of helping him see the folly of taking the fall for the whole group and to move outside the circle of detention and court and detention again.
May 23, 2011 at 9:35 PM