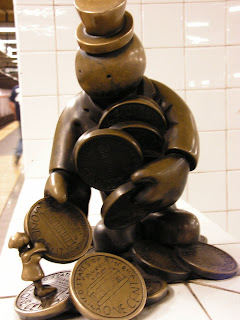 I have several things I want to follow up on today, and so, in no particular order, here they are.

First, the non rapture.  Lots of people have had interesting things to say about it and I don't have a great deal to add.  But I do want to emphasize that there are some people who are seriously wondering what to do with their faith right now, and I hope that we as a community can have compassion on them.

Yes, Mr. Harold Camping is a false prophet.  "Rapture science" is neither science and nor theology.  The claim that Christians make every time they make Eucharist together ("Christ will come again") is foundational to our belief, but how and when that happens is nothing but speculation.  We're supposed to live every day as if Jesus were coming back today, and that is hard enough.  The Bible, not even the book within it called The Revelation to John, is not a code to be cracked.  Armageddon, the Rapture, and the like are the stuff of imaginative people like Hal Lindsey and Tim LaHaye and Jerry Jenkins and plenty of others in the last century, and their work in this area does nothing to help us live as if Jesus were coming back today.  If anything, it is born out of fear instead of faith; it gives a false sense of pride, of some sort of warped sense of security, and as we have seen in some of the media coverage, it wrecks families.  Followers of Mr. Camping quit jobs, stopped saving for their children's college, told their children they were, sadly, not going to be seeing them in heaven after the rapture; and those things, my friends, are not what followers of Jesus would do.

But I have compassion for these folks.  If this is what their faith has been based upon, they are reeling now.  Some of them no doubt will continue to believe despite the evidence to the contrary; denial is a powerful thing.  Some will leave any sort of faith behind, having been burned.  And I hope some will strive to find a new faith community based on something more solid than end-times predictions and codes - like the love of God and love of neighbor that transforms us all, especially during our darkest hours.  We all have had our disappointments; I hope we can be compassionate and generous, as the Christian community is called to be, towards those who are so disappointed now.

The second thing is that God does not send tornadoes to wipe out anybody's neighborhood.  Let's just don't go there.  (See my posts here and here about my thoughts on where God is in this kind of destruction.)  Let us pray for all who have lost so much in this latest tornado disaster in Missouri and for those who are working hard in the rescue and recovery efforts.  And find ways to donate our time or money to help those who are displaced.

And thirdly and actually most importantly to me because this is real life real time in my own life, there is a new development in the juvenile court case I wrote about here.  The good samaritan who intervened and broke up the assault is someone who already works with troubled teens.  He was, as we all were, very sad about the defendant's decision to take the entire punishment for what the whole group did, although he completely understood why he did it; this man understands the code of the street as well as anyone.  He did, however, have some conversation with the assistant district attorney who was prosecuting the case, and the ADA has now arranged for the good samaritan to work with the defendant and his mother between now and the sentencing date to see if he can counsel the family on other options besides the one the boy has chosen so far.  Compassion abounds here as well as courage and generosity.  Kudos to the ADA for being willing to step outside of the system's box.  This course of action may not be enough to turn the boy around, but it does give us all hope that his life might be transformed through relationship rather than the dimmer hope that it will be transformed through the juvenile detention system.

Wow, and it's only Monday.   This is the day that the Lord has made; let us rejoice and be glad in it.

Ray Barnes said…
"This is the day that the Lord has made, let us rejoice and be glad in it"
Well I did, and it has been a good day for me, better than yours by the sound of it.
Hope yours is better tomorow.
Blessings
May 23, 2011 at 3:27 PM

Penelopepiscopal said…
Ray, you know the blessing: May you live in interesting times!
I do.
Glad you've had a good day. My days area certainly full.
May 23, 2011 at 3:47 PM