Resurrection? A Sermon for Easter 2A 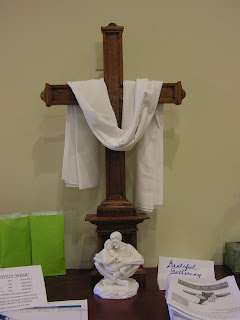 The people - volunteers, staff, residents - of Magdalene House are touching Christ’s wounds where they bleed in others.
This is what believing in the resurrection looks like: that we, having been forgiven and freed, are inspired to come out of our cozy and safe rooms to become part of something much larger than ourselves - to become a vessel for God’s love by touching others in the midst of this broken world.  To bring to others the abundant life Jesus came to give us all.  Resurrection is what comes out of devastation because of love.
In these bright days after Easter, let us live out that wild claim of ours.  Let us make the resurrection something real and tangible: something as soft as baby chicks, as warm as lambswool and duck down; something as fragrant as lilies and jelly beans and lavender body balm; something as bright as Easter bonnets and colored eggs and shiny as patent leather shoes; something we can hear like beautiful music and running water; something that sustains and heals like bread and wine and love.  Let us make the resurrection something real and tangible in the world again.
Alleluia, Christ is Risen!  The Lord is Risen indeed!
The Rev. Penny A. Nash
St Simon’s Episcopal Church
Easter 2A
Email Post
Labels: healing resurrection salvation sermons The Church Thistle Farms

Penelopepiscopal said…
Thank you, Perpetua! I hope I did a good job delivering this sermon; I had the good fortune to preach it in two parishes this week.
May 6, 2011 at 10:38 AM

June Butler said…
Penny, yours is a lovely sermon. The terrible disasters that have happened recently tend to overwhelm me when I think of them en masse, but as Oscar Romero said. "...we can only do as much as God makes us able to do;..."
May 7, 2011 at 7:57 PM

Penelopepiscopal said…
Thanks, Mimi! We can only do as much as God makes us able to do, truly. And we do so by just continuing to keep going, one step at a time.
May 7, 2011 at 8:07 PM