From an Interfaith Lawyers' Breakfast 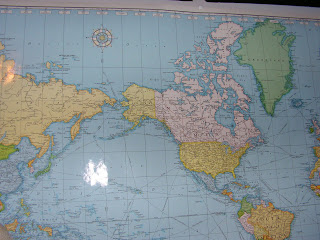 On Friday I attended a breakfast put on by the Atlanta Faithful Lawyers group, of which my husband is a founding member and the administrator/clerk/scheduler guy.  The majority of the men and women in the group are Christians, along with a smaller number of Jews.  Various members of the group get together monthly for an informal coffee (kind of like a colleague group only not facilitated) and quarterly for a breakfast with a speaker.  The overall "theme" of the group is about practicing law as a person of faith and the struggles that sometimes emerge when the two clash.  And also it's a format in which people of different faith traditions can get to know one another through their common vocation.

The group has wished for a while to have more interaction with Muslim lawyers and Friday's speaker was a practicing Muslim who also practices law in Atlanta.  He came to talk about his upbringing in Georgia as an immigrant who lived through a dramatic racial demographic shift in his neighborhood and school as a high school student and then as a law student in Washington, D.C. at the time of the September 11 attacks.  He also talked about his practice today and the areas in which Muslims are singled out for interrogation, discrimination, zoning battles and the like and how he works both with individual Muslims and mosques, and also with local government agencies and judges to help raise awareness about these issues.

(To that point, there was an article in the New York Times yesterday about the harassment and detaining of two Muslim immigrant soldiers who were recruited by the National Guard to become Arabic translators.  I strongly encourage you to read that article - click here.)

The lawyer's story was compelling - he wanted us to know that he's just a regular guy with the same desire as many of the others in the room to use his career to help people.  He also reminded us that Muslims have been around all along but suddenly Americans are noticing them.  He said that he believed that many Muslims (he was particularly thinking of those like him who are from Southwest Asia - India, Pakistan, Bangladesh) tended to keep to themselves and not become integrated into society.  And now they find themselves under suspicion.

When we are suspicious, we don't check out the rumors that go around.  Someone from another culture with extreme views speaks or acts and everyone assumes that the extremist speaks for everyone in that culture.   No culture or religion is a monolith, and yet many of us will not take the time to learn the nuances of other cultures.  We don't take the time to check out wild claims (particularly about religion) to see if they are wild rather than mainstream.  We don't take the time to get to know people and find out how much we really have in common, including loving and being loved by our Creator.  We fall into thinking that there is an "us" who are pitted against "them."

This is, of course, the classic immigrant story.  Folks move to another country, live near one another in the same neighborhood, and practice their religion and their cultural activities (food, language, music and arts, literature, social get togethers) both to practice their traditions and also to preserve their traditions and pass them on to their children.  But those around them see them as separatists who do not wish to assimilate.  I don't know how it works in other countries, but Americans are often suspicious of people who don't speak English (what are they saying???) or who don't cast aside their traditions (theirs) in order to take up new ones (ours).

Early Christians fell into this category themselves.  They had their own traditions and they were secret - they didn't let just anybody come to their gatherings.  What they were doing was illegal anyway.  People weren't supposed to gather in secret meetings - they could be plotting against the Emperor.  We tend to forget this about our own history, to excuse ourselves because hey, we're Christians and it was about Jesus so it was all right.

And America is a country of immigrants.  All of the big cities have their neighborhoods in which traditions are practiced and preserved - Little Italy, Chinatown, Irish Catholic neighborhoods, etc.  We love to visit those neighborhoods to eat, to attend and enjoy their cultural festivals.  But at the same time, many Americans also expect the immigrants to fit in to our society.  Immigrants have always struggled, with varying degrees of success, to find a balance between being tradition bearers and preservers and assimilating into the society around them.  And the dominant culture struggles as well as to what stance to take towards immigrants and those who live in cultural enclaves.

I personally believe that it is important to preserve and pass on traditions and that we do not all have to be the same.  In fact, our communities are strengthened, not weakened, by diversity of all kinds.  What we do need to do, and I think the speaker feels this way as well, is to build relationships across traditions so that others can understand and appreciate us and our ways and we them.  When we close ourselves off, associating only with like-minded or homogeneous groups, we stunt our growth as individuals and make society weaker instead of stronger.  If we can get to know one another, we can learn that others are not threats to us and build on our commonality to strengthen society - not just tolerating one another but appreciating one another and what they bring to the table where we all sit.

The breakfast speaker suggested that the best thing to come out of the morning was the contacts he was making with all those assembled. Now they knew about him and he knew about their group and could join the group and bring his friends to participate in what the others are already doing: sharing their stories as faithful lawyers, getting to know one another, and being equipped to witness to the rest of the world when intolerance breaks out.

Ray Barnes said…
Sounds a pretty healthy idea/initiative to me. Other countries please copy.
I'm sure such things do happen elsewhere, but the vast majority appear eager to point up differences rather similarities.
Since no one has a magic wand to wave, this looks like the only way forward.
May 14, 2011 at 10:24 AM

Penelopepiscopal said…
I think it always has been, Ray, but it seems increasingly important now. Many of us live in a pluralistic society now and we have to find ways to cross divides instead of enshrining differences and inflaming passions based on ignorance and intolerance.
May 14, 2011 at 10:42 AM

Perpetua said…
You make an important point here, Penny and I very much agree with Ray's comment. This kind of suspicion and cultural separation happens in the UK too and was exacerbated by the July 7th bombings in 2005. Patient reaching-out and bridge-building across the barriers is the only way forward.
May 14, 2011 at 4:10 PM