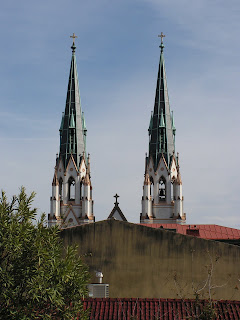 Today is another transferred feast day, the disciples Saints Philip and James.  This is not James the son of Zebedee, aka James the Apostle (whose feast day is July 25), nor is it James the brother of the Lord and head of the Jerusalem Church (his day is October 23).  And Saints Philip and James Day is actually May 1st, but it is moved to today because May 1 was Sunday, and the next day, Monday, May 2 (yesterday) was the day to which St Mark the Evangelist was moved this year because of the weekdays after Easter.  Got all that?  (All these calendars can be confusing, no doubt, and fortunately there are people who like to deal with these sorts of issues about moving saints days around so you and I don't have to.)

We don't know much at all about this James, but we know a little more about Philip.  He has a Greek rather than Semitic name, and it is to him that the Greeks who want to see Jesus (in the Gospel of John) petition for an audience.  Perhaps because he was a Greek, too.

A few years ago, a wonderful local actor named Brad Sherrill put on a one man show of a reading of the New International Version (NIV) of the Gospel of John.  A group of us went to see it in a small theater and I sat on one of the front rows (it was in the round).  One of the things Mr. Sherrill does is to pick out certain seats that will be the place where he speaks to particular characters in the performance, and it turned out that I was sitting in the seat of Philip.

The first time Philip is mentioned in the Gospel is in Chapter 1, when Jesus is calling his disciples.  Verse 43 says that he decided to go to Gaililee and found Philip and said to him, "Follow me."  Mr. Sherrill stood in front of me and said "Follow me" right to me.  I sat up a little taller in my seat.  And then he pointed to me and said, "Philip found Nathan and said to him....." and pointed to the seat where "Nathan" was.  It was all quite engaging.

Unfortunately, later, as Jesus is giving his farewell speech to the disciples, Philip comes in again.  Jesus said to the disciples, "If you know me, you know my Father also. From now on you do know him and have seen him." And Philip says, "Lord, show us the Father and we will be satisfied."  Of course, Mr. Sherrill was standing right in front of me as he said these lines.  And then he looked at me and quoted Jesus' last word to Philip:  "Have you been with me all this time, Philip, and you still do not know me?"

I was crushed.  How I had let Jesus down.

It was a great performance.  If you get the chance, you should see it.  It's just the Gospel, read, with a few props.  You really get the story when you hear it all in one piece - even more so for John, I think.

I hope your day today will not include feelings of letting Jesus down!

Anonymous said…
Thank you for your thoughtful post today Penny. It reminded me of a song we sing in the Salvation Army, and probably one you know too, where the last two verses say:-

Each day is a round of duty,
A pressing, absorbing quest;
Each evening the Lord will question:
Today have you done your best?

Each night-time the glittering starlight
Stands watch at the day's closed door;
Each morning anew God calls me
To rise and to try once more.
May 3, 2011 at 2:47 PM

Penelopepiscopal said…
Thanks, Judy. Thank God for all the second and third chances.
May 3, 2011 at 7:01 PM

Nancy Wallace said…
It's amazing how powerful a simple telling of the story or reading of a gospel can be, especially done in such a compelling way as Brad Sherrill seems to be able to do. Pity there's rather a large pond between where he is and where I am in the UK! Yes indeed, thank God for all those 2nd and 3rd chances (and many more in my case!)
May 4, 2011 at 3:50 AM

Perpetua said…
A memorable experience, Penny. Back in 1978 the British actor Alec McCowen did a solo performance of St Mark's Gospel, which was a huge success in London and was then taken to New York, where it was nominated for a Tony. It was quite extraordinarily unforgettable.
May 4, 2011 at 7:12 AM

Penelopepiscopal said…
Judy, maybe a field trip is in order?!

Perpetua, wasn't McCowen's performance recorded? I'm thinking I saw that on video some years back.
May 5, 2011 at 6:14 AM