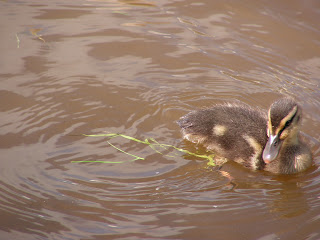 Remember the story of the ugly duckling?  The odd egg is hatched in the duck's nest and the odd baby doesn't fit in with the rest of the ducks; it is ridiculed and shunned and finally it runs away.  It has some pretty sad experiences, feels isolated, and only occasionally finds anything positive in its life.  But one day it sees a reflection of itself and realizes that instead of being an odd duck, it is really a beautiful swan, and it joins a swan community and is finally restored to well-being in relationship with other beautiful swans, its own kind.

I always felt so sad about this story.  So what if it turned out to be so beautiful in the end - all that it endured must have scarred the swan for life.  It was scarred already by the beginning of the story's ending.  How is there a "happily ever after" for one who has been damaged by such harsh treatment?  I think about people who do seem to be so scarred; some of them never seem to find happiness or even acceptance.

And yet I guess plenty of people find the story to be helpful - to know that enduring hardship is not all there is in life - that there is beauty, too.  That inside those who think they are misfits are truly beautiful creatures that will become whole when they find out who they are, they discover their own beauty and find a home in their own communities, too.  That all of us have had times of being treated badly.  That's all good.

Of course, the old fairy tales were told to make a particular point, usually about transformation from lowly to regal, and often include times of testing and misery and not fitting in because in reality you (the prince, princess or whatever) are better.  You are above the ordinary and mean.

Now in our postmodern age, we start asking questions about the story from other perspectives, other viewpoints.  We don't buy the story wholesale but look at the different parts and play with them, too.  While Hans Christian Andersen may have had one major point to make about personal transformation, we see many points and many points of view.  I always get stuck on how being treated so badly must have made a lasting impact on the poor creature and wonder if that all fell away at once or if there should have been an Ugly Duckling II in which the swan finds a wise mentor to help it heal its scars and shed its feelings of unworthiness.

Because being treated badly doesn't just disappear.  The experience of being the victim of meanness taps into and reinforces our innermost, secret fears about ourselves - that we really aren't worthy, we really are useless or ridiculous or total misfits.  We really are ugly ducklings after all, even if someone else thinks we're swans.  We know better.

In the end, I think it's the community part that's the most important aspect of this story.  The swan finds its community, and therein it will find healing.  Would that we had more stories about that part. I think many of us need to hear them.