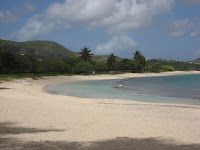 This is the Grotto Beach in St Croix, U.S. Virgin Islands, part of the Buccaneer resort. The darker arc between the shallow and deeper waters is a rock shelf; one can snorkel here any time - just walk in off the beach! - and see all kinds of fabulously beautiful fish and other marine animals. Little kids can stay on the shallow side and look at sea urchins and the smaller but very colorful fish, the ones one might buy at a tropical aquarium store - tiny yellow tangs, wrasses, damselfish, dottybacks, maybe a striped and floaty-finned angelfish. Older kids and adults can cruise the other side of the shelf and see larger fish - triggerfish and parrot fish and blue tangs and maybe a turtle or ray. This is the place where I found myself swimming with eagle rays, as I wrote in another post (here), just a few yards off the shoreline.

From this view, it's pretty. The sand is pretty, the sky is pretty, the clear, blue-green water is pretty. In person it is even prettier, with the sounds of the gently lapping waves, perhaps the breeze rustling some palm tree leaves, the warmth of the tropical sun, and the smell of the salty Caribbean Sea adding to the visual feast.

A place like this marks the intersection between worlds: between the rarified resort property with swanky villas and golf course and the considerably more modest abodes of the local St Crucians; between the air and land and the water; between the world topside and the world below the waves; and sometimes between predator and prey. Island people have always depended upon the sea for food and their livelihoods. They live in both worlds. Many ancient people, however, were afraid of the chaos of the sea - home of the leviathan, sea monsters, Scylla and Charybdis, and whatever else was lurking in the dark water that threatened the shore with its waves during storms, that threatened sudden shipwreck and death.

One of the reasons why I like the beach so much is because it represents the end (as in edge, not Armageddon) of the world to me. The place where one thing ends and another begins, and we can straddle them there, look one way and see one world and look another way and see another world and somehow be in both at once. The edge allows one a certain angle of vision that being in medias res does not. A certain perspective, an ability to see things as they relate to other, and often very different, things. The view from underwater into more underwater is very different from the view at the intersection of water and land.

Living on the edge, as it were, is an important place to be - if not all the time, at least occasionally. Being in the middle of things, being an insider with no view toward the edges, toward other views, can give us a false sense of the way the world is. An underwater-only perspective does not value the needs of the world topside. Those above the waves who only vaguely fear the unknown in the deep dismiss things underwater as lesser or dangerous or expendable.

We see this in society all the time - we live in homogeneous neighborhoods and imagine that all neighborhoods are like ours, or ought to be, and that those in other neighborhoods are not our concern. Our workplace or church or school can become what is frequently referred to as "the bubble," a place in which one lives physically and psycho-socially all the time without interaction outside the community. Political insiders have an intensely inward focus - they become absorbed with all things of their own party rather than the people that make up the whole community they were elected to serve. The more entrenched we are in our own world - whatever that is - the less likely we are to notice our deep connection, our interconnectednesss, with others. And thus the more likely we are to become polarized and see that as normal.