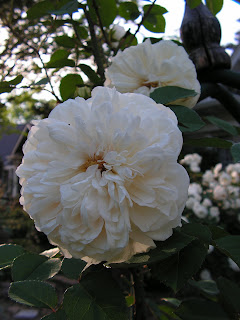 One of the nice things about living where I do is that the springtime is warm and the flowers bloom pretty early and often.  On the other hand, the weeds grow fast, too.  And way before summer arrives, the temperatures can go up to 88 degrees (F) or so rather suddenly, which makes the flowers and the people quickly wilt, especially if the humidity is high as well.  We haven't had time to acclimate, to toughen up.  The suddenly hot, humid weather is especially not fun for gardening, either planting or maintenance work like weed-pulling or mulch spreading.  But I really wanted to get some annuals planted in the empty-all-winter planters and I had bought the plants already.

So the other evening, I did a little "night gardening" - another Easter joy.  I started just around sundown and worked for an hour or so. This allowed me to plant annuals in the planters that are usually in direct sunlight without getting overwhelmed by the heat and also gave the plants a little time to adjust to their new home before the arrival of the next day's heat.  I was also limited, timewise, to just doing a little instead of deciding all of a sudden to overhaul the entire garden or something right then - and then having a sore back and scratches from thorns because I wasn't dressed for the job.

Another perk of night gardening is that my white flowers glow and release fragrance even more intensely on hot humid nights.  So in addition to the potting soil and water from the garden hose smell, I was also treated to the fragrance of tea and china roses while I worked.  I planted a new rosemary as well, which goes well with the roses, fragrance wise.  And, although we have lots of large insects, especially roaches and such, here, I didn't see much of them in the gathering dark.  I know they were there, but I wasn't seeing them; another plus.

And, saving the best for last, there was a great horned owl hooting from the huge oak tree just across the street.  I could just make out the silhouette, with his or her signature tufted ears, on a low branch.  We actually have a fair number of raptors in the neighborhood what with all our trees and proximity to a large park, and we often hear owls hooting in the evenings or sometimes the falcons that live down the street in a trailer when they're not out hunting and exercising.  I suppose the smell of gardening suggests to them the possibility of little rodents digging around in the yard - we have plenty of them, too.  This time there was just one owl - perhaps the others were observing other evening activities around the block.

So, it was still warm but bearable and then I had flowers to greet me in the morning.  I think I will do this more often - it's better than getting up early!

Perpetua said…
What a lovely post, Penny, but sren't there biting insects in the twilight where you are? In Europe at those temperatures in the evening we'd be fighting off swarms of midges or mosquitoes :-(
I bet your garden is a picture.
April 28, 2011 at 1:54 PM

Penelopepiscopal said…
Perpetua, later in the year, we'll have lots of mosquitoes day and night. But this early, we are spared, so far. I do have a lovely garden!
April 28, 2011 at 2:13 PM