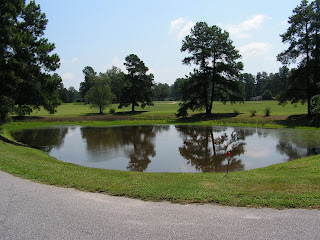 This is the pond in front of the house next door to the house in which I grew up.  It's not that much of a pond, and I'm not sure why it's even there in the first place.  It just is, and always was.

I spent a fair amount of time in and around this pond during my childhood years.  In summer, because it is shallow (I don't think it's deeper than four feet anywhere and much of it is only one or two feet deep), it often contracted, drying up sometimes to just a puddle surrounded by mud.

Whatever size, it was full of bullfrogs, which meant that in spring it was full of tadpoles.  Big fat ones.  We children (there were kids who lived in the neighboring house, too) would sometimes build tadpole labyrinths in the shallows, although the tadpoles were not always cooperative about swimming into them and we sometimes had to help them along.  We didn't need to put them in jars to watch, since they were so plentiful around the edge of the pond.  This was probably my most frequent childhood pond activity.  As an adult, I would walk by the pond and see the little pointed bullfrog snouts sticking up everywhere in the water, arranged in rows parallel to the shore as if they were attending an outdoor concert on the bank, and sometimes one's walk down the driveway would be accompanied by the percussive sound of frogs leaping into the water from the bank - plop, plop, plop.

Because of the frogs (and I suppose there were some fish in there - at least occasionally my dad would mention that he'd put some in), the pond often hosted egrets and cranes.  They were so elegantly beautiful, much too elegant for that scruffy little pond.  For many years, a great blue heron haunted the pond in the mornings and evenings, feasting on the frogs and whatever else was in there.  I loved to watch them walking so slowly through the water, stalking food, one foot reaching up and out before planting itself again.  Lots of birds nested in the trees on the pond's edge - no doubt there were plenty of insects to eat as well.  Sometimes we'd have ducks, too, and for a couple of years there were muskrats who had dug homes in the hill.  I particularly liked to watch the muskrats swimming across the pond, leaving a wide wake behind them.  I think the neighbors trapped the muskrats, though; I didn't see why they shouldn't live there - they added some excitement and interest to the place.  But I seem to recall that there was some adult disapproval about the muskrats.

Our various dogs enjoyed the pond, too.  Some of them made daily trips for swimming and drinking muddy pond water even though there was always fresh water in the tub at the horse barn.  They'd get in there and wade - even paddle if the water was deeper from recent rains - and then get out and shake the water everywhere.  The birds would sit in the trees, waiting for the dogs to finish their romp, and watch.  Sometimes the dogs would come all the way back to the house before doing the final shake, much to the consternation of anyone who was sitting outside on the porch.

In addition to the regular tadpole and frog hunting/watching work, there were two particularly notable but infrequent kid activities for the pond.  It wasn't deep enough to support a boat, but that meant that sometimes it froze almost solid in the winter.  We could sled down the steep hill from the road onto the pond for an exciting ride across the ice.  This didn't happen every year, so when it did, it was special.  First of all, we'd gather next to the highway for our starting place, which felt just a little dangerous.  And then we'd head down the slope - the courageous ones head first, the more timid ones sitting up.  And then let's see how far you go on the ice before running of out steam - or possibly cracking the ice!

The other, summer activity, was having algae fights.  That gooey green algae that flourished in the shallow water, mixed with a little pond mud, was plentiful and just right for scooping up and throwing at the other kids.  I actually thought that was pretty gross but I do remember enjoying it when I was probably seven or eight and then having to undress in the garage and put my clothes directly into the washing machine so I wouldn't bring any of that pond-smelling goo into the house.  I was not very ladylike when I was seven or eight.

Ah, memories.  When I ran across this picture of the pond, so many of them came flooding back.  Today I give thanks for my memories.

Ray Barnes said…
I'll try again. My first comment was eaten by the cyber monster.
Your description is absolutely lovely, it sounds as though you had an idyllic childhood.
Either that, or you have more than your fair share of the 'happy' gene.
I guess the way to find joy is to actively look for it. Thanks for another lovely post.
April 27, 2011 at 12:59 PM

Perpetua said…
Ray got there first with her use of the word idyllic, Penny :-) What an idyllic spot for children to play and to learn about the natural world. I had a country childhood too, but the only water was a stream well over half a mile away from home. Not the same as a lovely pond on your doorstep!
April 27, 2011 at 1:59 PM

Ray, I do have more than my fair share of the happy gene. I naturally look for the good even among the bad. A lot about my childhood was not idyllic (whose is?) but I loved tramping around outdoors with all the wildlife in view. We had plenty of it, outside and in (field mice loved our kitchen and snakes came in occasionally, too). Of course, back then, I often thought it was boring!

Perpetua, there was a stream in the woods behind our house, farther away than the pond, and I liked that, too. Mushrooms, moss, rocks, running water. I'm pretty sure I was trespassing when I played there...Water attracts kids like magnets!
April 27, 2011 at 2:17 PM

Freda said…
Having the happy gene is a gift. The pond must have been beautiful when the wildlife was in evidence. Your description of it is evocative and haunting, especially as it looks so silent now.
April 28, 2011 at 11:35 AM

Penelopepiscopal said…
Freda, I have never thought it was much of a pond, but it was a place of great interest when I was very young and wanted to be outside. I always thought much more could have been made of it - deeper (so it would support a boat), with a pier, landscaping, etc.
April 28, 2011 at 12:43 PM

Pond Filters said…
I like this blog very much. You have shared very nice information here of your childhood..
April 30, 2011 at 5:51 PM