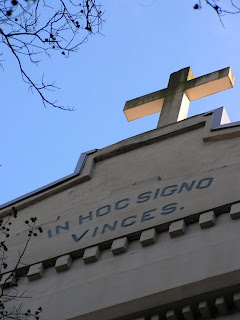 Today, I am thinking about war and the human cost of war.

This week marks the 150th anniversary of the beginning of the American Civil War.  Listening to a couple of shows on NPR as well as reading some articles about what people today have to say about the Civil War, I am reminded that William Faulkner said, "The past is not dead. It's not even past."

Meanwhile, America is currently (overtly) engaged in three conflicts (without having declared war), in Afghanistan, Iraq, and Libya.  And in Libya itself, the government backed forces are fighting against the people.  Which is not a new thing in countries run by dictators.

My study book during Lent is Diarmaid MacCulloch's A History of Christianity: The First Three Thousand Years; I have just finished reading the section on the Crusades, when the Church declared that becoming a soldier, going to war, was now a holy calling, a new pathway to salvation.  Of course, Christianity became the religion of the Roman Empire after Constantine's military victories in the early Fourth Century, in which the Emperor declared that God had given him a sign in the sky - a cross, with the words, in hoc signo vinces.  In this sign, conquer.

Ever since Augustine of Hippo, who wrote about "just war" during the time his own community was being ravaged and Rome was being sacked by "barbarians," the Church has had something to say about war and has been implicated more than once in war that was not at all just.  Even a short chapter on the Crusades cannot avoid mentioning the atrocities committed by Christian Crusaders against Jews across Europe; in sacking Constantinople, the seat of Greek Christianity; and even fighting against Poles and Lituanians who were already Latin Christians.   As MacCulloch puts it, the Crusades started out as "holy warfare ... begun with Islam as its enemy [and] ended up with Christians fighting Christians."

So today, I am thinking about violence and about the human cost of war.  We use words like "casualties" to soften the blow, but it is people who are injured and who die.  And not just people who are soldiers.   The American Civil War was noted as one which tore not only the country but families apart - brother fought against brother, father fought against son. War also creates orphans, creates poverty and starvation, interrupts education.  People are the casualties, and some pay with their physical lives, some lose their community life, some lose their future.  There is not time or resources for education during war, not in the countries that are engaged in endless conflict for generations, where children become soldiers, many people are missing limbs and eyes from bombs and shells, women are captured and raped as a matter of course.

The Bible, both Old Testament (Isaiah) and New (Revelation), say that when everything is all over, God will wipe away every tear.  There will be many tears to be wiped away.  Many of them because of war.

Perpetua said…
My father fought in WW2 and my grandfather in WW1 and yet 60 years on we're no nearer seeing war disappear as a means of settling conflicts.

I was at secondary school when the centenary of the American Civil war was marked and I remember seeing D W Griffith's film Birth of a Nation at school.
April 15, 2011 at 5:15 PM

Penelopepiscopal said…
I never saw Birth of a Nation... should put it on my list.
It does seem that war will always be with us, like the poor. But we should remember that neither one is a commandment.
April 15, 2011 at 7:53 PM

Anita Mathias said…
Penny, Have you watched McCullough's History of Christianity videos. Fascinating, they give a good overview, and are very accessible. The book is beautifully written--but I can see that it's going to take me a while to get through it.

Thank you for the blog roll add for Dreaming Beneath the Spires. I have changed my URL to match the title. The new URL is dreamingbeneaththespires.blogspot.com. Would it be possible to add the new URL to your blogroll please, as the old URL will no longer work.
You are on my blog roll too, of course.
Thanks much,
Anita
April 16, 2011 at 6:31 PM

Penelopepiscopal said…
Anita - I thought something was wrong - first my blogroll disappeared and then when I reconstituted it, some things didn't work right. I will fix the URL.

I haven't seen the videos but would like to. I'm about half way through the book now - actually thought I might be able to read the whole thing during Lent, but that was back before Lent actually started. Fortunately, the way it's written, it's easy to read in small sections.
April 16, 2011 at 6:36 PM

Perpetua said…
Penny, on a different subject, I've been reading on the BBC news website (no TV here) about the dreadful storms in the southern USA. I do hope you are OK. All those affected are very much in my prayers.
April 17, 2011 at 2:53 PM

Penelopepiscopal said…
Thanks, Perpetua. My neighborhood escaped this round of storms, but there was terrible damage in and around the the place where I grew up. We have had several of these really violent waves of storms these last weeks across our region.
April 17, 2011 at 3:34 PM