Resurrection: A New Life of Freedom 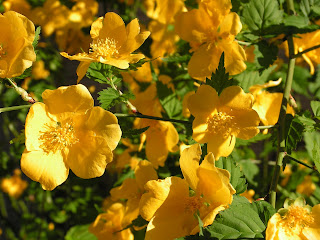 Sometimes folks get a little squirmy talking about resurrection. We rational people cannot quite make this out - it defies the laws of the universe. Dead things stay dead. If they turn out not to be dead, it's because they didn't die. Oh, sure, through modern medicine, sometimes someone "dies" and is brought back. But basically, dead is dead and that's that.

And of course, if the laws of the universe turn out somehow not to work, not to be reliable, then the world could collapse into chaos any old time. (I might contend that the world is pretty chaotic right now, but....) We need the rules to be reliable. So dead people stay dead and resurrection is not something that can actually happen.

And yet, this is what we claim on Easter - Alleluia, Christ is risen! The Lord is risen indeed!

And there are all kinds of explanations that go with it - that Christ defeated death, or cheated death, or tricked the Devil; that God vindicated the innocent and just Jesus of Nazareth; that he died for our sins or because of our sins, that he died so that we might be saved, that he died because anyone who went around undermining the state and the religious authorities could expect such a fate. All of that is worthy of much reflection, and I may get around to writing some of them at some point, but today I want to concentrate on resurrection and freedom.

This does not mean that I think the resurrection was "metaphorical." I believe that God acted in history, both in the incarnation and in the resurrection. Something happened - our faith is not built on, nor could it have lasted on, a metaphor for 2,000 years. Or as John Updike wrote in his poem Seven Stanzas at Easter:

Let us not mock God with metaphor,
analogy, sidestepping transcendence;
making of the event a parable.....

At any rate, whatever our debate about what it was that happened to Jesus after he died, in this life, for us, resurrection is not just about what happens to us after we die or at the end of the world (although I recognize that for some folks, this is the main point of religion and going to church). I am the Resurrection and the Life, Jesus says.  It's also about new life in this life, here and now. If the resurrection means that we are now free, then what does that mean?  And, perhaps more importantly, how do we live differently now, knowing that we are free?

For those of a more Puritan mindset, what ought to happen is that in our new life in light of our salvation, we should be extremely obedient to all kinds of rules. Because Jesus may have died for us, but any old time we could slide back into hell and lose our salvation. So that we are not all that free, really. We are just free to live by the rules. Those who live with this mindset are very concerned about the idea that if there is not the threat of hell or losing salvation or being cast into the outer darkness and all that, then people will just be lax and do anything they want if they are already assured of their salvation. There has to be a line, and it cannot be crossed, and this is because God is so awesome and we are so unworthy. Many of us remember Jonathan Edwards and his sermon Sinners in the Hands of an Angry God. And granted, he was focused on converting people with this sermon, but you know how that goes. After all, we are all sinners, and who could be sure that God would not take out his wrath even more vengefully against someone who was supposed to be a Christian and then slipped.

I suppose there are some people who will not do the good thing unless they know that they will be punished otherwise. Certainly, advocates of the death penalty use this argument frequently: The thread of the death penalty will keep people from killing other people. So far, I haven't seen that working out so well. But I digress.

So, what kind of freedom do we have because of the resurrection? Given that one of the major themes throughout all the scriptures is the building up of the community, I'm thinking that freedom is not the right to just do whatever one pleases and damn everybody else. First of all, the notion of personal freedom was not really in the vocabulary of any of those who penned the many writings in the Good Book nor of the theologians writing in the first several centuries after the resurrection.

I'm thinking about freedom from a host of things that weigh us down. Anxiety, depression, fear, anger to name just a few. And here is where the actual resurrection comes in: If we are assured that God loves us and has adopted us as God's own children, that when we die or at the end of the world, we too will be raised to some kind of new life and not just be nothing or be tormented.  We have come from God and we will return to God, just as we heard on Maundy Thursday.  And so if death is not the worst thing that can happen to us (because when we die we will return to God), then we can let go of a lot of our "stuff." We don't have to be anxious any more, because we believe that somehow God will make things all right and that it isn't our job to direct God in that all-right-making. We don't have to be afraid, either, because no matter what happens - even when we die - God is with us. We don't face these things alone.

My own story about letting go and becoming free is this: Nearly thirteen years ago, I was diagnosed with cancer. I had two young children at home, aged three and seven. Immediately, my friends and church community gathered around me. They cared for my kids while I went to doctor appointments. They cooked for us, they brought me flowers, they came to sit with me. When I was in the hospital, my husband had a phalanx of friends with him - so many that they had to go out of the waiting room to an outside garden because they'd filled the inside room up.

At some point pretty early in that process of recognizing my own mortality (which is what everyone who is diagnosed with a serious medical issue goes through), I realized that my family would be fine, whether I was around or not, now or later. I was not the center of the universe. They were loved and cared for, as I was, and if I could not care for them for any reason, others would. They had a community that loved them; I had a community that loved me. I could let go of my panic and my futile grip on all the "musts" and "shoulds" - I could trust that the future of the world or my husband and children's world did not completely hinge on my own personal orchestration.

And so I was able to let go of my life. Just let go, and let the doctors do their work, and let my friends feed us, and let God love us all as God always does. If this was my time, so be it.

And that is how I got my life back. I let go my need to hang on to my life, and I got a new life, not only cancer-free thanks to good medicine and good doctors, but also a life that was a lot more free. I was not in charge of the world any more, and that was incredibly freeing. I could let people help me.  I could see how things might turn out without life-sucking anxiety ruling the day. And I healed so quickly.  I just felt so light.  I felt that I was being held up by everyone else and I could just be, and heal.

I wish I could say that such an event was a once and for all, just like Jesus' death. It wasn't - there are many things that still enslave me, there are times when I still get all anxious about making the world work the right way, especially for my children (even though, needless to say, they are no longer three and seven).

Anonymous said…
thanks for this beautiful Easter message Penny
April 23, 2011 at 3:34 PM

Ray Barnes said…
You always have an upbeat message and I often find your post really inspirational. So it's easy to assume life has always been straightforward for you.
Clearly, that is not the case. You have had quite a 'bumpy ride', but have risen above it.
Easter Blessings to you and yours Penny.
April 24, 2011 at 1:52 AM

Perpetua said…
Thanks so much for this, Penny. Your cancer and mine virtually coincided and I'm so glad yours was so successfully treated. Easter greetings to you and your family.
April 24, 2011 at 4:17 AM

Anonymous said…
Happy Easter, Penny! Light has come into the world, and the darkness cannot overcome it. The Kingdom of Heaven is here. Thank you.
April 24, 2011 at 11:44 AM

Penelopepiscopal said…
Ray, I've found that most people have had a bumpier ride than they let on.

Perpetua, it is amazing to discover how many people have similar stories to our own. Now we have another point of contact - thanks for telling me.

S Monk, thanks for coming by!

Freda said…
Sharing some of your personal journey through dark times, makes this Easter message all the more poignant. Thank you.
April 25, 2011 at 1:37 PM