Destruction. It's not about Noah Any More. 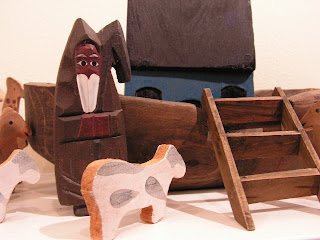 Today the cleanup continues.  Whole neighborhoods were destroyed by the tornadoes that ripped through several Southern states, including mine.  I am pleased that Episcopal Relief and Development is working with the Episcopal Dioceses in these states to help in the relief efforts.  Good work is being done. (To read about what they are doing, as well as to donate to ERD, please click here.)


Something has been bothering me, though.  In the aftermath of the terrible destruction, I have been hearing interviews with survivors in which they report,"We prayed for God to keep us safe."


And when I hear it, although I am obviously very glad for their good fortune, I think about those who didn't survive, and I cringe a little.  I think about their families and how they might wonder, upon hearing the survivor's comments: "Wait, does this mean that those who were killed hadn't prayed?  That God put up a protecting shield around those who prayed and left everyone else unprotected?  That God decided who would live and who would die in the whirlwind?  That God kept that woman safe but left my mother to die?"


We of course remember the Noah story, how God chose one family to ride out the flood in safety while everyone else is swept away.  And I think we often focus on the fact that Noah and his family were chosen to be saved.  But the point of the Noah story is not the selection of Mr and Mrs Noah and their sons Shem, Ham and Japeth and daughters-in-law Mrs. Shem, Mrs. Ham and Mrs. Japeth.  The point of the story is the rainbow in the sky as the sign that God would never again send a destroying flood, even though people don't live up to God's hopes for them.


I'm glad to know that people pray when they are in danger.  I'm glad to know that they feel that God helps them stay safe.  Calling upon God's name is not only natural but faithful when we are afraid.  (Save me, for the water is rising up to my neck! shouts the psalmist.)  Being in peril is very frightening, and it no doubt helps - and it is right - to call upon God to keep us safe and to feel God's presence amid the storms.


And God's ways are certainly mysterious.  I have had some near-misses and sometimes felt a guardian angel has protected me from harm.  I am happy to pray morning prayers of thanksgiving for being brought to a new day in safety.   I believe that God cares for me and wishes for me to have abundant life.  I believe that God is with me, as God told Moses, and Jesus told his disciples - I will be with you, even unto the end of the age.


But there is an unintended consequence of thinking that God kept the people who didn't die in the tornadoes safe, which is to suggest that God abandoned the others.  That those who perished in these disasters were not beloved of God and perhaps even that they somehow deserved their fate.  Perhaps they didn't pray or didn't pray the right way or just "weren't chosen."  We can end up thinking that God has chosen to save us and chosen to abandon our neighbors who are in the middle of the destruction.  This leads to hubris - God saves me (because I deserve it) but not others.  We have seen in the media occasions for this thinking taken to extremes, from the Westboro Baptist Church group claiming that soldiers' deaths are God's punishment for allowing homosexual people to serve in the military to Pat Robertson blaming Haitians' political history from the early 19th century for the earthquake that devastated their island country last year.


I don't think that's how God works.  I don't know why some people die and others do not, but I do believe that we find God with us as we hide in the basement and also with us as we perish in the rubble.  Easter is about how not even death can separate us from God's love and care.  It doesn't mean we won't suffer or that we won't die.  It does mean that death does not have the last word.  It does mean that we don't die abandoned or alone, for God is always with us, especially when we are suffering.

"For [as Paul says in the Letter to the Romans] I am convinced that neither death nor life, neither angels nor demons, neither the present nor the future, nor any powers, neither height nor depth, nor anything else in all creation [from tsunami to tornado], will be able to separate us from the love of God that is in Christ Jesus our Lord."

Perpetua said…
Oh, I SO agree with you, Penny. Beautifully expressed and theologically profound. Thank you.
April 29, 2011 at 11:04 AM

Anonymous said…
One of the best responses to this dilemma I have heard... victory over death; God is with us o matter what. Penny, you are a gift
April 30, 2011 at 7:11 AM

Penelopepiscopal said…
Many thanks, Anon! The struggle for meaning in the midst of trouble is always with us, but I hope this gives us something to hold on to.
April 30, 2011 at 8:36 AM