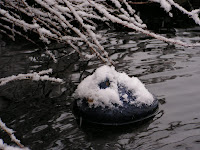 Despite the fact that I am an extrovert, there are time when I feel that I feel the need to hide. Actually, I suspect it's because I am an extrovert - I am used to interacting with people a lot, with joy, and can hardly imagine being around people and keeping to myself. And so I tend to kind of hide out so as not to feel the weirdness of being with people but not really being me.

This is not the same as hiding from God. God knows where we are, anyway, so it seems futile. Although it apparently helps to send out a little signal every now and then - Here I am, feeling joy! Here I am, in pain.... You know, prayer.
Lots of people hide. Some can do it in plain sight, but again, that's usually not a tactic used by many extroverts. We think out loud, when we're with people. I recall a character in one of those Southern novels, I think, describing hiding out as being "under the porch." That's where someone goes, like the family dog, to lick one's wounds, to think about things really intently, to be near and able to hear others but not be seen by them. So they won't see the skinned places or tears. So they won't be asking questions. Like, what are you going to do now? The family member in the book remarked very matter of factly that when what's her name's boyfriend broke up with her or husband left her or whatever it was, and others were looking for her, she was probably under the porch, but she would come out when she felt like it.
But as I said, one can't hide from God. I think God hangs out under the porch with us, and doesn't demand interaction when we are in that place of intense thinking and pondering and wound-licking and doubt-examining. Sometimes that's where we can just be with God - not in that "contemplative prayer" sense but in that abiding at the edge of consciousness sense. Because when one is hiding, one is doing a lot of brain work. Resting in the arms of God is not the same; in fact, it's banishing cognitive processing.
There are times, though, when either God or our friends and family or all of the above say, enough. It's time to come out. Maybe not even to "face facts." Maybe just to allow friends and family and God to reach out to us, to comfort us, to interact with us, to let us just be with them. Maybe just to allow ourselves to be in relationship again, despite our fears and doubts. To allow someone else to get us a band-aid, or sit with us while we cry, or listen to us express our suspicions that we are losers, to say something funny or silly and make us laugh. To sit with us, to cry with us, and best of all, to laugh with us.
We were made to be in community. In the image of God, a God in relationship. God said, it is not good for a human to be alone. At least not all the time. But there are times when we need to take a break, to get away from it all, to sit alone to think or to feel or to rest in the arms of God (all of these, but not all at the same time). The trick is learning how to do that without breaking connections. Maybe by leaving a note: "Under the Porch. Be Right Back."
For everything there is a season. A time to dance and a time to be under the porch.
Email Post
Labels: angst refreshment