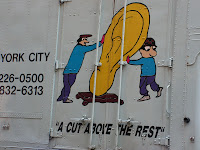 We all know that laughing is good for us. And we all know that some things are just funnier when they're told to us by old friends with whom we've shared many laughs before.

There's a group of women I've known for twenty years and we get together every so often, and boy do we laugh. For a while, we got together in restaurants because then nobody had to cook and we could get out of the house and away from the kids and the disasters of laundry piles and pet throwup and wear clean clothes. But nearly every time, we would laugh so hard and so loudly that the people at nearby tables would start to shoot us dirty looks. I always wondered if they were jealous that we were having such a good time together but also remembered times when I'd like to have a quiet dinner with grown up conversation and I could understand their pique.

So we tried to meet at one another's homes. The kids and dads would head off to the basement or wherever and when everyone was gone would come out and ask what on earth we were talking about that was so funny - so hysterically funny for three whole hours?

Off and on now some of this group is part of a book club and the "new" folks have been able to fit right in. So it's the same thing. Lots and lots of laughing and meanwhile exiled to the basement dads and kids wondering what is so funny about all the books we read. Is Jane Austin or Sebastian Junger really that funny? Maybe they'd been missing something....

There's just something about being with people one has known a long time, people who have shared our lives and heard our stories and we can just let loose with them and they with us. We know that some of us are dealing with difficult family situations - children or parents or both at the same time - or with personal illness. We have been with one another as parents died or became incapacitated, as children go off to college or off the deep end, as jobs got cut or husbands got sick or houses had trees fall on them. We've celebrated anniversaries, birthdays, pools, vacations taken, vacation homes bought, job successes, advanced degrees earned. And so we really know one another, even if we go for months without seeing one another.
We can just pick up where we left off and before long someone tells a story and we're off.

Laughing is good for you but laughing with old friends is the best medicine.
Email Post
Labels: friends the journey