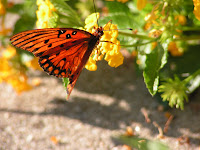 So said Mr. Skimpole, an endearing if mischievous character in Charles Dicken's great novel Bleak House while he was happily plying his trade upon Richard and Esther, a couple of well-intentioned generous people who turned out to be simply two of the multitude of people Mr. Skimpole regularly and cheerfully convinced to pay off his debts du jour. Mr. Skimpole only wished to be free - and so convinced others to support him in that effort with genteel delicacy. Mr. Skimpole is simply childishly irresponsible, and he relieves Richard of a bonus and Esther of all of her savings, but he is such a delight, and so delighted to be placed in the hands of so many lovely people, and so everyone presses upon him the funds he needs to remain childishly irresponsible - a free butterfly.

Many of us worry about being "taken." About being tricked into giving away our time, our support, our expertise, and especially our money, by those who claim to be butterflies, a la Mr. Skimpole. We worry that someone is trying to sell us something we don't need or is defective; we worry that someone is trying to gain favor so that they can then take advantage of us in some way. They want to buy our property so they can turn it into a trailer park; they want to marry our cousin so they can get ahold of his bank account; they want to have lunch with us so they can get free legal advice; single women want to have babies so they can get money from the government. If the alleged trickster is a family member, the issue is encircled by even more angst. Should we be understanding or should we be practicing "tough love?"

These are legitimate concerns and questions, and there is certainly a place for tough love, but there is also a real danger that these concerns, if they become the lens through which we consider all of life's both large and small transactions, will form us in a negative way. We should be reasonably careful and circumspect in our dealings with others, and yet we risk becoming hardened and crabbed, suspecting everyone of attempting to take advantage in some way, and unable to experience either generosity or joy for ourselves or others. If we are always suspicious of being taken advantage of, always imagining others as freeloaders or people with negative motives, then we have become warped like a board that is constantly subjected to harsh weather. No doubt some of us have been subject to harshness that has understandably had the effect of hardening our hearts.

In the end, I try regularly to remind myself that God is gracious and generous - to a fault, some would say, and to that I say, "Thanks be to God!" - and that in response it behooves me to be as gracious and generous as a flawed, limited human being can be. If I am to be a follower of Jesus, then I am to be generous in the manner of the woman who lost the coin, the generous and loving father of the "prodigal" son, the good Samaritan.
Email Post
Labels: community following Jesus generosity the journey

Anonymous said…
Your post reminded me of the oft-quoted advice of Buckminster Fuller: "Dare to be naive."
September 17, 2010 at 9:43 AM