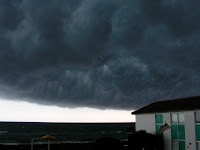 There's no better place to watch an approaching storm than the beach, with its open view out over the water (although I suppose any flat area without buildings would do as well - it's just that I have this prejudice about things being better at the beach). If one has been watching and attentive, then the drama is easily followed step by step. The clouds gathering, the sky getting darker, and if there is a well-organized storm approaching, the edge of it will move steadily forward like The Starship Enterprise cruising through space and into view. The edge is clear - but as it gets closer the one huge, dark cloud shows itself to be not a single blob but a conglomeration of roiling and rumbling and menacing movement that swirls and unfurls and oozes within it - along with maybe some flashes of lightening. The wind goes before it like a herald, whipping the flags and banners and hammocks, and the sea oats bend in unison. Umbrellas are uprooted and tumble end over end down the beach and anyone who is still outside clamps one hand over his or her hat and the other clutches a jacket closed as he or she trudges resolutely on before finally breaking into a run as huge raindrops begin to fall, first sporadically, driven by the wind, and then as a deluge unleashed, a curtain of grey wet that quickly soaks all it touches.

It was a safe thrill to watch this storm's arrival from the balcony of our motel room. Not so if one is out in it or if one is in a city like New York yesterday where it is trees being uprooted rather than umbrellas, trees that crash onto cars and houses instead of umbrellas tumbleweeding it into the water.

The storm clouds remind us of the awesome power of the forces of nature and how small we are in the face of such awesomeness. How easily we can be tossed about ourselves, how stability and permanence are mocked as the storm rages on.

(It is no wonder that the ancients imagined stormclouds as the chariots of El, the supreme god of all the gods in Mesopotamia who was portrayed as a stormrider, swooping above the earth in the swift and terrible storm clouds. This motif was appropriated by the worshipers of Ba'al in Ugaritic literature, as Ba'al began to replace (his father) El as the chief God of the Canaanites, but YHWH also was described (see especially Ps 68; Ps 104; Deut 33:26) as rider of the clouds. YHWH and Ba'al were rival gods, if you will, and the OT writers freely appropriated Canaanite symbolism and motifs and stories to show that YHWH was the true and powerful God, not Ba'al.)

The power of storms is fascinating and frightening. Its beauty and its terror are opposite sides of the same coin that echo the numinous experience of the divine - the mysterium tremendum (the overwhelming mystery that invokes fear and trembling) and the mysterium fascinans (the fascinating mystery that attracts and compels). We, just as the ancients did before us, stand before God and experience the numinous, which is at once mysterious, awesome, and urgent.
Email Post
Labels: Creation God's presence Mystery