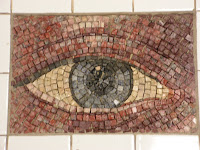 In 1998 about three hundred mosiacs featuring eyes were installed in the subway tunnels/passageways underneath the World Trade Center at at the Chambers Street /Park Place Station complex (take the A or the C; or the 1 train) as part of the Metropolitan Transit Authority's Arts for Transit program. The artists used the eyes of people they had photographed in New York and each of them is different. The tunnels were mostly untouched by the events of September 11, 2001, and when one goes to visit the Ground Zero area via subway, one will come upon these mosiac eyes on the walls and columns along the train platform and tunnels between stations and between tracks and street. You can read about it here.

The project was conceived and put into place three years before 9/11, but I felt when I visited the area five years ago that those eyes on the walls really spoke to me about the tragedy of that day. They were eyes of many different people, different kinds of people who had round eyes or blue eyes or dark eyes or almond shaped eyes who all begged me to remember the different kinds of people who were killed, who were in the thick of the recovery efforts, who were residents or workers or guests, who were family members and loved ones of those who were killed. They put more than a face on the tragedy - they put the window into people's souls (as sometimes we describe eyes) out there to gaze upon us and to invite us to return the gaze. To remind us that what matters in our world is not ideology or buildings or politics but people, all kinds of different people, all beloved by God and usually beloved also by other people and their mothers and fathers and children and even their pets.

We all have the tendency to see (or want to see) eyes on things that don't have eyes. Cars' headlights become eyes in our own minds, not just in cartoons. Some airplanes have eyes painted on them and I've seen staplers with eye stickers above the "mouth" where the stapling actually happens. There is an entire Facebook group dedicated to stickling googly eyes on inanimate objects (check that out here). We like things to have eyes - the eyes give them a personality and makes them friendlier and inter-actable-with.

Those mosiac eyes in the tunnels haunted me for days after my visit to New York, but not in an accusing way. Yes, they reminded me of the people who had died, but the haunting was also an invitation to use my own eyes to see people instead of ideas and to look into the eyes of those I love and those I hardly know but do engage from time to time and remember that they are people instead of objects or props or representatives of things, even precious things. Looking into someone's eyes signals to them and to you that you acknowledge them, and they acknowledge you back as they return your gaze, however short - a fleeting look, a look away, a penetrating gaze. We say to each other, I am human and I recognize you as human, too. This is the language of the eyes, one that can be curious or questioning or veiled but is often frank and open and unashamed if we will be see and translate and thereby relate.

And so I felt an invitation and try to look at the eyes of the grocery cashier as we say hello before he scans my lettuce and I get out my debit card; to look at the eyes of my children when they are telling me something about their day; to look at the eyes of homeless man in the park and say hello instead of looking away; to allow someone to look at my eyes when I confess my shortcomings and my fears. To take the occasion again and again to engage with people and allow myself to be engaged with as well. To remember that eyes smile, eyes search, eyes invite, eyes show pain and hurt and damage, eyes say hello and goodbye and I know you and I am here and that I would do well to learn to read the language of eyes or risk utter blindness that eventually would reach my heart and turn it to cold stone.
Email Post
Labels: for those we love open our eyes relationship