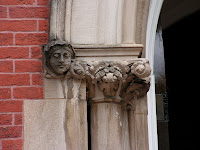 Many buildings of a certain age and/or style feature stone heads of people at the doorways or elsewhere. Christ Church Cathedral in Dublin has all sorts of these stone folks peering at worshipers from the tops of columns - some of them laughing, some solemn, some quite fanciful, some almost grotesque. This lady graces one of the archways in a building on the campus of Georgetown University in the District of Columbia. I am always looking for these architectural features and so I see them often. To me, it's almost as if there is another realm populated with little stone people whose heads periodically poke through into our realm, especially around doorways and archways and columns.

The people of our age don't think too much or too seriously about spirits or creatures of another realm, visible or invisible, except for in the movies or books like Harry Potter or other tales. Moominland exists only in books, as do hobbits. The idea of another realm is simply fantastic. And yet these stories and books and movies are hugely popular. We are completely fascinated with the idea of another realm in which fantastic things happen all the time, often just under our noses. We love the idea of a magical world, the world over the rainbow or through the looking glass or accessed by a special train on a special platform or through the fur coats in an old fashioned wardrobe.

But spirits? Nope. Only in horror movies. A world filled with angels and demons or other spiritual beings is not quite so interesting.

An exception, I think, is the movie Wings of Desire, a German film by Wim Wenders, about angels who live in the sky over Berlin and listen to people's thoughts. They're not messengers who bring news from God to humans as angels do in the Bible. They are often helpless to assist humans, but they do abide with them. Eventually one of the angels falls in love with a human and discovers that he can become human himself, which he does. It's a lovely movie and it presents a much more ambivalent (and to me interesting) portrayal of heavenly beings than, say, a TV show like "Touched by an Angel" or even that elegant angel played by Cary Grant in The Bishop's Wife who is interesting mostly because he's that gorgeous, elegant, suave Cary Grant.

The Kevin Smith movie Dogma presents a more varied realm, with evil spirits breaking into reality as well as heavenly messengers who have gone somewhat amok. Smith's movie entertains some interesting questions but the existential queries end up trumped by the characters and an outrageous (in a good way) plot line. The questions are there, but unlike Wenders, Smith does not press them particularly thoughtfully. He goes for laughs and shock where Wenders goes for what one reviewer called "sheer visual poetry and deep emotional resonance." I think it's resonance that best describes how one might apprehend a spiritual being.

I myself am ambivalent about a spiritual realm filled with, well, spirits. Sometimes I do feel as if there are angels who visit and even guard us. I'm not sure I feel the same about more dark or shady spirits. Sometimes I feel it's all a rather romantic fantasy in which I indulge. Sometimes I think we rational humans have lost our ability to imagine and to inhabit a "place" of alternative possibilities, to our detriment.

What about you?
Email Post
Labels: Angels God's presence listening for God movies