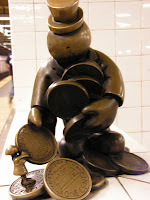 So who among you, if you were a shepherd, upon learning that one of your sheep had been lost, would leave all the rest of your sheep to manage for themselves in the wilderness and relentlessly search for the one until you’d found it and restored it to the flock and then called all your friends and ask them to rejoice with you for searching out and finding the sheep instead of cutting your losses and leaving it behind. All of us would do that, right?

And who among you, if you’d lost a some money, wouldn’t search high and low for it and then when you found it throw a big celebration party for your friends that costs more than the money you found? All of us would do that, right?

And who among you would drop everything - leave your job or your family or your errand running or your baseball or football game and accept the invitation to come over and rejoice with someone who has found something that was lost, something you didn’t even particularly know or care about? All of us would do that, right?

And who among you would gladly sit at the table and eat and make friends with people that the rest of the world considers notoriously sinful and generally bad company? All of us would do that, right?

The truth is that in this story we read today, most of us only like to see ourselves as the lost sheep whom Jesus has found. We want to be the ones that everyone rejoices over.

And some of us at some point in our lives may well have been the lost who were found.

The truth is that in this story we read today from the Gospel of Luke, we may want to be the found sheep coming home around Jesus’ neck, but we’re more likely to be the grumbling Pharisees who complain that Jesus always welcomes people we don’t want to associate with. Jesus restores us as a community by bringing in those people we don’t want and plopping the down at the table with us. And then expecting us to rejoice about it.

Jesus shows us God. Jesus befriends the outcast and shows them hospitality and generosity. This is how God is. But the Pharisees show us ourselves. Ever since Cain got mad about Abel’s sacrifice being pleasing to God, this is what we do, grumble and resent and worse. And yet God keeps on inviting everyone to parties, the lost and the never-were-lost-to-begin-with, all together. The question is, will we - can we - join in the rejoicing? Because that’s what we are being asked to do here in this parable.

And yet, this week the United Kingdom based Charities Aid Foundation, using data from the Gallup Poll people, released the results of a study showing that people are happiest when they give away money. This echoes a study done in 2009 by the Harvard Business School showing that while people can’t buy happiness by spending money on things for themselves, they are much happier when they spend money on gifts for others, including entertainment and dinner parties, and/or give money to charity. And this follows up on a study done in 2008 at the University of British Columbia showing that giving money away makes people happy - no matter how much they have to begin with or how much they give away. It’s the giving away itself that makes the difference.

Every year economists, psychologists and God tell us that opening our hands and hearts to others will make us happy. And every year I hear someone complain, often it’s me doing the complaining, that someone else got the job, got the raise, got the credit and the accolades, got the party thrown for them while I worked hard and tried to be faithful and got no party; and no thank you I would rather not contribute to the festivities or come to their party, thanks anyway, but no. Every year I find myself standing huddled with the ninety-nine, feeling left out and edging toward resentful.

Why is it so hard for us to open our hearts and open our hands? Why is generosity so difficult a practice? Why do we act as if love - God’s love or our love - is a limited resource that we have to fight over or parcel out in pinches? Why do we act as if we don’t believe what God has told us and tells us over and over again, that God will provide, our needs will be met, we will be rescued from bondage, even the bondage we impose upon ourselves, and that we should not be anxious about what we will wear and what we will eat: for just look at the lilies of the field that neither toil nor spin and yet not even Solomon in all his glory is clothed as one of them. Why do we act as if we don’t believe that there is enough for everyone - when there is more than enough, there will be seven and also twelve baskets left over - while we go through life with pinched hearts and clenched hands?

I don’t know why, but I see it all the time, in myself and all around me. Our cloudy national economic climate no doubt makes us even more anxious these days, but the truth is that we were already anxious but now it seems more ok to talk about it.

But I believe that even if we are not called to be the Savior, for Jesus has already taken care of that job, we are called to be generous, to practice generosity, generosity of spirit and generosity in action.

A couple of years ago I led a women’s retreat on the topic “Generosity as a Spiritual Practice” and engaged with some Episcopal women in trying to focus on generosity as something we need to deliberately practice, to do, not just try to feel, to help us manage our anxieties about scarcity and our tendency toward pinched hearts and clenched hands. We acknowledged that generosity doesn’t come easily to many of us and so we need to practice, practice, practice if we are going to be able to rejoice with Jesus when the party is about someone else.

We talked about things like letting someone in in traffic, about sitting with strangers at church events and really listening to them instead of talking about ourselves, we talked about giving away money when we feel anxious about money and discovering that we still have enough ourselves and how we feel good when we participate in the common good in a concrete way. And we talked about how we are formed by the things that we do and that regularly practicing generosity of spirit and generosity in giving away our time and our talent and our treasure will slowly but surely transform us.

What we do, how we act, forms us and transforms us. This is at the heart of our practice of common prayer in the Episcopal Church. We are formed and transformed by our praying together, our sharing the sacred meal, our doing God’s work in the world together in mission. We are transformed by opening our hands and our hearts to one another even when we don’t want to. And that takes practice.

And so as an act of practicing, literally, physically, in prayer and petition, I’d like for us to sing together about opening our hearts. Whoever wants to do it with me please join in, but if you’d rather, you can just sit back and listen.

[And then we sang the song Open My Heart (in three parts) by Ana Hernandez.]
Email Post
Labels: community relationship salvation sermons the journey