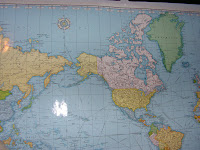 We have all, lately, been paying special attention to geological events around the globe. Particularly earthquakes and volcanic eruptions. These are everyday activities in the life of Mother Earth - check here and see how many earthquakes there have been in the last seven days, and look here to see how many in the last month (this link also shows you the outlines of the seven major tectonic plates plus some minor ones, and you see the earthquake activity is concentrated around the edges of the plates). The earth's tectonic plates - huge sections of the earth's crust (lithosphere) floating on the aesthenosphere - are always moving, a few inches each year, and they sometimes collide or slide by one another, causing earthquakes, volcanic activity, mountain building and forming ocean trenches. My children learned about tectonic plate theory by watching Bill Nye the Science Guy using the Chocolate Chip Cookies of Science. (He ate them at the end of the demonstration.)

The thing about the activity of plate tectonics is that it never ends. It's not like once the shaking stops, everything settles into a new normal. More shaking or lurching or upheaval is to come. Some of it might be small, just some tremors that rattle a few cups and send a picture askew, and some might be huge, the stuff of collapsed homes and bridges. Sometimes something like the Andes Mountains are the result of tectonic plates colliding. Some of the shaking and upheaval will come soon, and much of it will come later. The new normal is constantly being set and then challenged again, sooner or later.
I find personal life to be this way, too. Life is just going along, and then, boom, it gets shaken up. A rift opens, a disaster strikes, bridges fall down, walls go up. The landscape looks a little skewed or maybe completely different. After the "event," it takes some time to clean up or get over or repair things or take new routes. But being creatures that seek homeostasis, we try as soon as we can to settle into a new system, a new routine, an adjusted life. This ends up taking little time in some instances and lots of time in others. In any event, we have to learn how to incorporate them into our lives. We say, things will never be the same. And they won't. That's not necessarily a bad thing. It's just life.
Sometimes I wonder if God isn't doing a little of the shaking up. Not the disaster part, but maybe a little jostling here and there. We get in ruts; we take life for granted. As irritating or difficult or upsetting as change is, change is part of life and we need to be shaken loose from the things we're gripping to death or sometimes even to lose our mooring so we can go out to sea for a while. Change opens up new vistas and exposes things that were previously hidden.
Lots of people ask if God is doing the big shaking up, too. Causing the earthquakes or tsunamis or hurricanes. We've seen some high profile religious leaders say such things since forever. To that, I simply say no. See this post I wrote about the earthquake in Haiti for more on this subject.
Change is constant. Weathering it is part of living a full and satisfying life. It keeps us flexible and open and gives us new eyes as well as bringing us sorrow and feelings of grief and loss. Signs of change are always all around us and it helps to be able to see change as just something that just "is," that has no inherent positive or negative value. Change can be life-giving and creative and it can be catastrophic.
I suppose either way, chocolate chip cookies might be appropriate.
Email Post
Labels: angst change of scenery Haiti hope resurrection the journey

Anonymous said…
I hope by now you are coming around to the idea of comparing different Marketing techniques,
usually in terms of ranking a site. Also, it make a bad impression
of you as a writer and more engaging for the reader.
So many times, new students of marketing forget about the importance of focus.