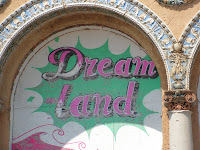 I have already talked about how I wish people would be nice (here), but it's still on my mind. I still spent some time feeling less than thrilled with the state of our common life. But there are people who are nice, and here's a story about one of them.

Yesterday my mom realized that she was almost out of some of her necessary daily medications and was worried about how she was going to get more since she is in the process of changing doctors since her move and hasn't seen either of the doctors who will be monitoring the two conditions these medications treat. When she realized that she still had some refills left on each of them, I just took her to the pharmacy right across the way from where she lives, and explained to the young woman in the pharmacy that Mom was new to the area and needed some medications refilled. She first checked to make sure she had the medicine and then assured Mom that she could take care of transferring and filling her prescription within fifteen minutes if we'd like to wait. There was some paperwork to complete, which I did for Mom since she doesn't see well, and the pharmacist noticed that I had done it for her.

When it was time to check out, the pharmacist told Mom about their free rewards program and showed her the card and said she would use it right away and that since she already had Mom's information on file now she would just fill out the form for her and she could be on her way. She told Mom to be sure to bring it with her every time because she'd get some discounts on over the counter stuff by using it whenever she buys anything. She also said she noticed Mom's address and that the pharmacy offered free delivery to Mom's retirement complex and so next time she could just call and they would bring her medicine over to her. Then she helped Mom navigate the debit card swipe machine (which Mom has never used before).

We thanked her and turned to leave and she said, "You're welcome, and welcome to Atlanta. I hope you'll like it here."

It was so nice to see someone taking so much time to be helpful in really concrete ways. I'm sure they get many of the retirement set at this pharmacy since it's nearly across the street and I was impressed with how easily this young woman picked up cues and found ways to be specifically helpful directly to Mom and not through me (because that happens sometimes, especially if I do the talking first as I did this time).

After I took Mom home, I went to the bank to deposit a check for her; as I drove up to the window, the teller complimented my flowers in my Beetle's vase. I recalled that the last several times I've been to the bank, the tellers have been unfailingly polite. It's as if they actually appreciate my business. And yes, I know that banks probably are deliberately trying to be nice because people are kind of hacked off at banks these days. But whatever the reason, I appreciate it when people are nice.

Once again, my faith in people was restored.

But the thing I noticed most in both of these encounters is that the people in the bank and the pharmacist as well all seemed to be happy themselves. It could be that they are all just naturally happy, helpful people, but I think, too, that being nice just makes you happier. I know I feel better when I am nice to people.

So go out there and be nice. It makes the world easier to live in.
Email Post
Labels: community moving Mom