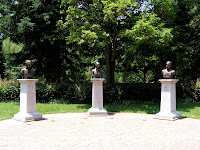 We hear a lot from talking heads - the people on TV who read the news and tell everyone their opinions and speculate about this and that. Between the regular "news hour" on network television there are cable news channels that feature all talking heads all of the time. There are sports talking heads - those guys in suits who sit behind a counter and talk to us and banter with each other. And there are virtual talking heads - talk radio, blogs on the internet - and of course newspaper opinion pages. Lots and lots of talk.

Talking heads are disembodied - it's all about the talk, what's in people's heads, what they think (although I dare say not all of what talking heads do is rational). School can be talking heads, too - the teacher or professor stands behind a podium and speaks about the subject at hand. So can preachers.
And there's nothing inherently wrong with that. I like intellectual engagement; I like talk - both talking and listening to others talk. (My family and probably many friends will say I mostly just like talking.) I learn a lot through listening to someone speak about a subject without a bunch of distractions.
But I hear more and more that people crave something more engaging in school and church - a soundtrack (or at least a beat), visuals, experiential offerings. Movie clips with discussion, hands-on activities, interaction, use of humor and irony. My kids know what's happening in the world because they read parodies of it in The Onion or watch Stewart and Colbert on TV - examples of ironic talking heads. Why take a foreign language class, learning verb tenses, when you can travel somewhere for an immersion experience? Engage people in different ways, don't just stand up there and talk at them.
Which all sounds fun to me. (Provided the technology doesn't fail or overwhelm the message.) Sometimes we think everyone is supposed to enjoy what we do, learn like we do - and if they wish for something different, we call them immature or lazy. We had to work at paying attention, by golly. But really, I think those who pooh-pooh the younger generation are perhaps showing a little laziness themselves.
On the other hand, I really deplore the ubiquity of video screens. One can't even walk through the shopping mall or airport without passing a huge video screen every thirty yards or so. There's something about screens - we are drawn to them almost against our will. Those screens on the highway showing advertisements and clips of video are most distracting. And someone told me recently about being at a large venue where there was a famous person speaking and there were video screens in various locations so that everyone could see her as she delivered her address. And even those sitting near to the podium, who could have easily watched her "live and in person" from their seats turned to watch the screens instead. They are like magnets - we can hardly pry our eyes away from them. Yes, screens allow us to see things we couldn't see otherwise - undersea worlds, space, the unfurling of a flower and passing of the seasons, people's insides, all sorts of wondrous things. There are screens that show fabulous things that surely feed the soul and then there are screens that seek to capture us and feed us a steady diet of video junk food.
Food for the soul is what everyone wants, in one way or another, even if they don't describe it as such. A chance to be engaged with life itself and not just distantly rational, endlessly discussing theories and ideologies. There's a place for that, yes. I hope so - I love long discussions about theories. I can listen to certain talking heads for hours. But when people long for engagement, it seems foolish to suggest that they let that idea go and just get with the program.
Email Post
Labels: risk-taking