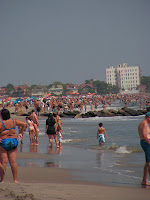 There are a lot of people out there in the world. There's a lot going on. We're all bumping into one another all the time. I'm particularly struck today by the differences in people and their behavior and speech.

The people who are talking and yelling in the press - in print and on TV - and that guy who wants to burn Korans and everybody who is running for office and a bunch of other people are just about on my last nerve.

As Barbara Streisand almost said, people need people. And those folks who are getting on my nerves seem to have forgotten that.

Those folks need to pay attention to the people I saw today as I accompanied my mother from her apartment in a retirement center to a doctor's appointment. This was her initial appointment with one of the doctors she is going to be seeing regularly now that she has moved here. When I went to pick her up, she was sitting outside with some other residents, chatting. A middle-aged man had just come to pick up another elderly lady resident, and one of the group sitting with my mom asked him if the woman he was picking up is his mother. He replied that she is. The woman then went on to tell him that his mother is a very nice person and that they all like her very much at the retirement center.

We then drove over to the doctor's office, which is located in one of the many parts of The Emory Clinic, a vast network of doctors of all types associated with the Emory Healthcare system, which is part of Emory University in Atlanta. The retirement center provides transportation for residents to visit doctors at The Emory Clinic, but since Mom was a new patient and would have lots of forms and things to deal with, and since she is visually impaired, I am taking her to all her first appointments. She was very pleased with the visit, saying that both doctors she saw (an intern and a professor at Emory's Medical School) and the nurse were all very patient and thorough and that they listened to her (she has a big gripe about doctors who do not listen to her) and explained everything they were doing and changing about her treatment to her clearly. At the end of the visit, Mom needed some phone numbers and things she didn't have written down, so the nurse came out to get me. The nurse told me that any time Mom needs to see them I am welcome to come in with her and ask any questions I'd like to ask as well. She said that she understood how difficult it might be to be dealing with all new doctors and a new place to live and all that and that she hopes I will feel comfortable with my mom's medical care.

We checked out and I drove Mom back to her place. The medical transportation van was just pulling in ahead of us - this is the way by which Mom will go to her next appointment. There were two or three residents on the van, one of whom was in a wheelchair and we had seen her at the same doctor's office just a half hour before. The van driver took great care in helping each of them out of the van and into the building in turn, smiling and talking with them and making sure they were steady. Mom turned to me and said, "The people who drive the vans are very nice."

In this day and time, people sneer about people who are "nice." We don't want to be labelled as "nice" because it means we are not particularly special and maybe we're lacking in the excitement and interesting and intellectual departments. But those people whom I mentioned earlier in this post, the ones who are getting on my nerves, could use some "nice" in their lives. So much of the conversation is about ideology and theories and big generalizations (like Islam or Big Government or Liberals/Conservatives) and actual people just don't even figure into the equation most of the time. (Archetypal people, however, do - the people who "personify" or stand in for the theory or group - these people are talked about. But they are by their nature not "people.")

People need people and we need people to be nice and we need to be nice to people. The big sophisticated, supercharged world out there ought to be listening to the lady at the retirement home complimenting someone's mother and watching the patient guy who drives the van helping elderly people back into their homes and learning from the nurse who wants the whole family to feel good about Mom's health care. Those are the people who understand how we need one another, and how we need to be with one another, and how we ought to talk to one another.