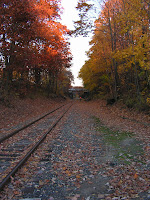 We love to go along with folks down Memory Lane. Especially in books. The memoir as a genre has grown explosively over the last decade or so, particularly the memoirs of those with troubled (sometimes fantastically so) childhoods. Dorothy Allison's Bastard Out of Carolina; Mary Karr's The Liars Club; Frank McCourt's Angela's Ashes; Alexandra Fuller's Don't Lets Go to the Dogs Tonight; and Jeannette Walls' The Glass Castle come immediately to mind. We read these books almost compulsively and like watching a train wreck, we can't look away, we can't put them down and when we finish we go on to the next one. And there always is a next one, to humanity's great shame. For all of these books describe children who were simply born to parents who could not, for a variety of reasons, care for them and they suffered and many were damaged.

In fiction, the journey down Memory Lane is no less compelling for many of us. Many of us book-lovers consider fictional characters real in some way, anyway. Mme Bovary, Emma, Lizzy Bennett are more real to me any of my ancestors, except for the one who kept diaries. I remember how many people I knew who were convinced that The Bridges of Madison County was a true story about a real National Geographic photographer.

Memory is an odd thing, though. We filter our memories, we arrange them so as to make sense of them, we forget some of them for long periods of time. I often wonder, where are these memories stored exactly and why is is that, as so famously illustrated by Proust and his madeline, suddenly something (a sight, a smell, a sound) triggers memories that have long lay dormant in our memory storage boxes. Sometimes people are accused of "making up" memories or of being persuaded by others to "recall" certain memories. Sometimes we have a memory of a memory; sometimes we remember the things that actually happened to other people and have been appropriated by our own memory-making equipment.

Kazuo Ishiguro's haunting novel The Remains of the Day is one of the great examples in the exposition of memory filtering. His next novel, The Unconsoled, was firmly rooted in the questions about memory and the reliability of memory and of people as rememberers. It also was his least successful novel (I could hardly finish it myself).

I just finished reading Jane Gardam's novel Old Filth, another fictional trip down M.L. An exceptional read, told from the perspective of a now elderly man as he nears the end of his life, it is one of those books in which memories are all jumbled up and not at all sequential - things just pop up in the middle of other things, thoughts, stories, people, events, feelings - they tumble all over one another in and out of time, sometimes being reframed much later as maturity allows a new understanding or new information is revealed that casts the memory into a different light. Memory is a slippery thing, always changing and evolving, and it is intensely personal. Gardam subsequently wrote another novel, The Man in the Wooden Hat, this time written from the perspective of Old Filth's wife. Some of the same stories are in there, apparently, and I am looking forward to reading it and seeing how her versions differed from his. I don't know if it's also told in the jumbly memory style of Old Filth or if it's more linear. We shall see soon enough.

We all look back; we all have our memories. It may be upsetting to think of them as things that slide around and change as we grow and reframe them, but I think it's true. And in a way I think it's a good thing: it means we are still growing, too, if we can reinterpret our own memories again and again as we learn more about ourselves and about others in our lives. As we learn about our parents' childhoods, so we reinterpret our own because we begin to understand what was going on with our parents when they were raising us. And we may understand something that felt like one thing to actually have been another.

That being said, and going back to the memoirs I mentioned at the beginning of this post, there is no point in putting lipstick on certain pigs. Abandonment and cruelty and neglect and abuse are not things we ought to explain away. People spend lifetimes trying to get past some of those things, and it is appalling what tragedies reside in so many families. But there is also a letting go, if one is not to be consumed and ruined, which is healthier than many other ways of coping (emotionally shutting down; addiction; suicide; abuse of the next generation).