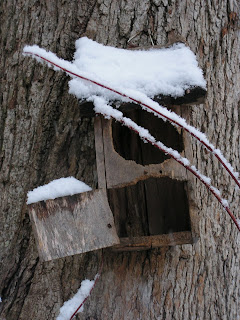 This is a reprint of a post I wrote about my dad, mostly, who died on May 1, 2007, and about my growing up.  My mom, sadly and yet thankfully, has since sold the house and land that I describe here.  I miss him, and I miss the landscape of my childhood, even as I know that it couldn't be any other way, now.


My parents' home is on seven acres just outside the "city limits" of a small town in eastern North Carolina. They built it in 1959. It's in a spot that is not exactly rural but neither is it in a subdivision or neighborhood. The next door neighbors have a pond in the very front of their five-acre spread, and there's a fenced-in pine-wooded area with a two-stall horse barn in the back of my parents' property attached to a lane along the side boundary leading to a larger, open pasture in the front. People driving by on the highway stop their cars to look at, and sometimes get out to pet, the horses.

There is a multitude of birds always in evidence, from a great blue heron who frequents the pond to fiercely territorial hummingbirds who build tiny nests in the river birches off the back deck, and much in between. Mourning doves mourn in the mornings, mockingbirds sing all day, whippoorwills call out in the evenings, and owls hoot at night; hawks hunt rabbits and mice in the pasture; and the pines in the back are full of goldfinches, bright yellow flashes flitting from tree to tree. Hot summer afternoons feature the occasional quail mother-and-babies-parade accompanied by cicada love-song traveling music. Chickadees, titmouses, cardinals, catbirds, jays, wrens, flickers, woodpeckers of all types (including Woody Woodpecker lookalike pileateds) and bluebirds make their homes in the trees and shrubs and birdhouses. Barn swallows and bats swoop through the evening skies, hunting mosquitoes, while crickets and tree frogs drone and hum as the darkness falls and deepens.

Of course there are other animals, too. In the winter one might see deer tracks on the deck after a light snowfall. For a while, a family of muskrats lived in the pond dam, alongside huge (really huge, and loud) bullfrogs that started out as fat tadpoles darting through the slimy algae in the shallows. Shuffling groundhogs trundle across the yard at dusk. Box turtles creep through the weeds around the fence. Bunnies, squirrels, mice scurry everywhere. At night, car headlights coming up the long driveway catch the glow of opossum or raccoon eyes. Hummingbird moths are plentiful among the cleome, and butterflies decorate the buddleia. And there are snakes, too. There are plenty of snakes in a place like that.

The man who lived next door used to make bluebird boxes, back when everyone was doing their part to provide nesting places in hopes of bringing the bluebirds back (which was a successful venture, judging from the number I see every time I go back). My mom bought several from him and my dad put them up for her in both the front and back yards. Most are on their own posts, or on fence posts, but he nailed one of them to a big pine tree in an "island" planted with shrubs and perennials in the middle of the back yard; that island was always a hotbed of bird activity.

Once when I was visiting several years ago, my dad and I were sitting on the deck in the back of the house, a great vantage point for bird watching. I think some cedar waxwings were coming through, stripping the mahonia of their blue drupes, or maybe it was the time we saw painted buntings in the pines. At any rate, while we were watching whichever avian spectacle it was, my dad mentioned that there was a bluebird couple that had laid their eggs in the bluebird house on the pine tree earlier in the spring, and that one day he noticed the pair, clearly in distress, first perching uneasily on a nearby powerline, and then fluttering back and forth and making all kinds of noise, "just a-squawkin'," he said, which a-squawkin' went on for much of an afternoon. He said he figured there was something in the birdhouse, so he finally went out there and looked in the hole, and sure enough, there was a big black snake curled up inside. Of course it had eaten the eggs. "Those birds were mighty upset," he said. And I thought, "Well, duh."

Recently I was visiting my mother at the house, and we were sitting on the deck again, and she mentioned that she had taken the bird house down. She said that pretty much every year the bluebirds would lay eggs in the nesting box, and it seemed like every year a snake would get them. She wondered how it worked that the animals came back to the same places year after year - she's had hummingbirds for 25 years in the same tree, and she wondered for how many years would it have been the same birds, and when did different birds come, and how did they know the exact trees and where she put the sugar water feeders, and how do they still know to buzz her personally when the sugar water was getting low.  (Once, we were sitting on the porch and one of the hummingbirds hovered for a few minutes in front of her face.  We figured it was partly her bright red lipstick and partly the knowledge that she was the maker of the sugar water that was at work in this scene.)  We reminisced about the wren who laid her eggs in a hanging basket of spider plants on the porch ten years ago, who flew out when my mother watered the plant, which made her spray water all over herself in surprise. My children and I got to watch the first egg crack open and the baby bird struggle out. That bird, or another like it, made a nest in that basket several years in a row. She wondered for how long the same bluebirds came to the same nesting boxes or goldfinches to the same pine trees. She wondered if it was the same snake. Then she told me that soon after my dad died, she went out to the pine tree and took that nesting box down. She didn't say so, but I think she could not cope that year with the bluebird couple's lament on top of her own.

My dad died four years ago today. I doubt that my mother, who has lost most of her vision to glaucoma, will be able to manage living much longer in that house - it's getting old and that property is much bigger now that there's no one to really take care of it, to keep the wildness from completely taking over. Death and loss are natural and they happen to everyone. My dad did not shut his eyes to the ways of "nature, red in tooth and claw" as Tennyson grimly describes it. He wasn't sentimental about any particular bluebird eggs - there would always be others, more. His whole life, all eighty-three years of it, had been spent outdoors, in places teeming with life - on a farm, or in the woods, on a pond or at the ocean. There was always plenty of life; even in the midst of loss, there would always be more.

Still, I ached for every groundhog at which he took aim with his old shotgun (they ate his tomatoes in his garden) and every baby rabbit snatched by hawks, and my mother told my son that even as a five-year-old, I pled for the life of every mouse - and there were many - she caught in the kitchen mousetraps ("look at his cute little eyes, his little face!" I'd say. "He's begging you to let him go!"). "Life" was all around, a given, easily taken for granted; my world, too, teemed with life around the clock, all those birds and frogs and critters of every variety that populated my seven-acre childhood kingdom. But I still cared deeply for particular lives. I still do.

My dad was not "a dad." He was my particular dad. We certainly had our differences - I had my failings and he had his - and there was a lot between us that remained forever unspoken. Much about me was a complete mystery to him, and much about him I never understood, either. He could be stubborn and hard-headed, and I was not only stubborn and hard-headed but dramatic and prone to emotional and completely irrational outbursts as well. (I know now that I may have gotten that from him.) I was too tender-hearted, he said, and I sure needed a lot of attention.

I'm sure he knew that the heart is not rational; I can't believe he didn't know that, even if he didn't like it. You should have seen how indulgent he was with his dogs. I think he felt that I should be tougher, that I should outgrow my imaginary friends and storybook notions about animal families, and then maybe I would not be so tender-hearted.  I'd be more even keeled.  I wouldn't suffer so much. At any rate, he felt I ought to learn, one way or another, to be more realistic about life in this world, he said. But, oh, I just wished he didn't see being tender-hearted as a failing. I have since come to count it as a strength.  I imagine it gave him pain as a father to see how much hurt his only daughter could feel. I imagine he wished for me a life free of too much hurt. As if any of us could escape that.

But still and all, he was not "a dad" but my particular dad, and there will not be another dad for me. Rest in peace, Pop.