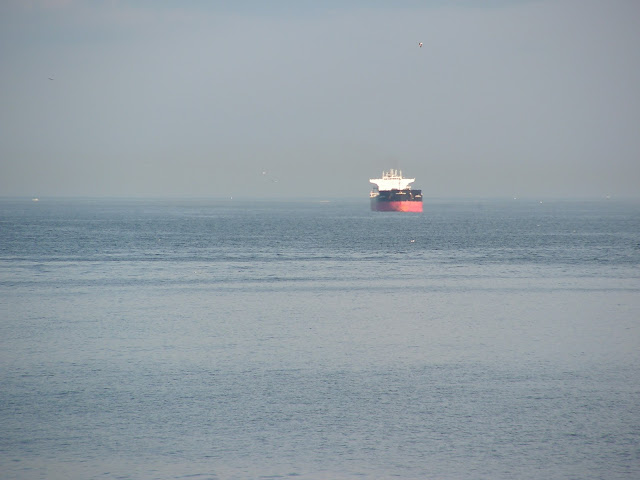 I drove from Atlanta to Williamsburg yesterday. It's a 560-something mile trip. The Google map always wants me to go all the way on interstate highways, but I usually cut through the countryside on the Virginia end of the trip. That much interstate driving is mind-numbing.  And depending on the time of day, it doesn't take more than a few extra minutes to go the scenic route through the forests and fields.

An unexpected pleasure on the trip was having to stop on the bridge over the James River. The drawbridge was opened so that a ship could go through.  It was just after dark and the moon peeked out from behind some clouds.  Everyone parked their cars on the bridge and got out to watch the ship glide by.  The breeze was damp and smelled like river (the good kind of river smell) and the ship's motor purred and the lights sparkled on the little ripples around the bridge supports. Smaller boats were stopped to let the larger one through.  The ship's wake rocked them and it left a smooth pathway in the water.  It was surprisingly quiet, and we all mostly stood there silently, watching.

After the ship cleared the bridge, it blew its horn a few times.  The children in the car behind me were waving into the dark.

It seems that we all had an instinct to get out and watch. Something pulled out us out of our car-containers and into a common space.  It was nice to stretch my legs - 90% of the trip was done - and smell the air and just stop and watch the ship. I felt connected to the earth again after nine hours of rolling along interstate highways.

Today I get another treat - I'm taking the ferry across the James River twice! There will be cormorants and great blue herons and all sorts of gulls parked on the wooden pilings, and some of the birds will follow the ferry's wake - I suppose the ferry churns up some easy pickings for them.  Most people will stay in their cars, but a few will get out and feel the breeze and smell the river.  If it's not raining, I think I'll get out. I'll have had enough sitting in the car!

It's good to be back in Virginia.

Ray Barnes said…
Great description Penny. I can almost smell that river from here.
Glad you had a safe journey, enjoy the birds.
May 17, 2012 at 2:38 PM

Penelopepiscopal said…
Thanks, Ray! Today I watched a gaggle of laughing gulls at the ferry dock preening and laughing raucously.
May 17, 2012 at 6:28 PM