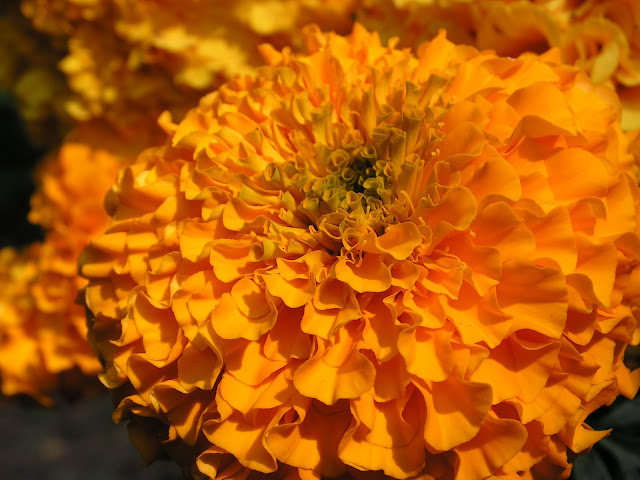 I saw the vibrantly colored, beautifully peopled movie "The Best Exotic Marigold Hotel" yesterday. I thought it was delightful.  I like those ensemble movies (and what an ensemble! Dames Judi Dench and Maggie Smith! Bill Nighy! Tom Wilkinson! Penelope Wilton!) where a bunch of random folks get thrown together and we get to see how they all react.  Who cares if it's not an original plot device?  There's nothing new under the sun, after all.

No doubt you've seen the reviews, and they are mixed.  I will admit that Maggie Smith's character turns out to be something of a deus ex machina at the end, but I thought it was a fun way to spend a couple of hours on a hot day.  (And I contend that reviewers see films differently than you and I.)

Particularly, I was struck by Penelope Wilton's character.  She makes up her mind as soon as she arrives in India.  She is determined to hate everything and to refuse to engage or learn or open up at all, and so her husband goes about exploring and getting to know the other characters while she sits in her room drinking white wine and not finishing the slim book she is reading and not even finishing for fifty-three days and looking forward to plain grilled chicken for dinner.

I was struck by her because I recognized that part of myself that sometimes acts just the way she does (if not in quite as exotic locations).  Sometimes I decide I don't want something and I'm not going to be open no matter how enjoyable it might turn out to be. No matter how much I might grow. No matter how it might change me.

Because that's part of the problem, of course.  Being changed can be painful. While other characters (particularly the one played by Judi Dench) have had change thrust upon them in a way that they simply can't ignore, Wilton's character is able to hang on to a slender thread of hope that she doesn't have to change. She doesn't have to engage. She thinks she has the luxury of staying inside an impervious protective shell dictated by some kind of code and self-image to which she clings oh so tightly.

The thing is, she is still in pain. It is quite painful to watch her act out of this place of violent self-protection that isn't at all necessary, given the relative safety (if not familiarity) of her situation.  Even the otherwise xenophobic Maggie Smith character takes a bite of food she is afraid of because she understands the harm she will do someone else if she doesn't.  But Wilton's character stays behind her fortress even thought it ends up costing her everything.  She will not be touched or moved, in contrast to all of the other players in the drama.

And so I enjoyed the movie. I enjoyed seeing how the characters each played out their story. Even if it was somewhat heavy handed, I appreciated the different approaches each character took to what first looked like a disaster but of course turned into an opportunity for exploration and growth.

And I liked the "old saying" that everything will turn out all right in the end. If it's not all right, then it's not the end.

We just sometimes have to adjust our understanding of what is "all right."

Penelope Swithinbank said…
An interesting interpretation and insight on change and our attitudes to it. Yes!

Not having set foot in a cinema for over 30 years I have to wait to see films on TV but it sounds as if this one is worth waiting for.

You're right of course, about change and moving out of our comfort zone and the way our willingness or otherwise to accept the challenge of change shapes our personalities.

We all, even those of us who try to be open to new things, have areas which are unassailable (usually the very ones we most need to be flexible about), the trick I think, is to keep trying.
May 29, 2012 at 5:20 PM

Penelopepiscopal said…
Ray, I hope you will enjoy it when you see it. I didn't want to give too much away for folks who haven't watched it yet.

You are right that the things we most need to be flexible about are the things we guard most heavily. Sometimes I even see it coming and tell myself that "this is going to be the thing I end up having to deal with even though I don't want to."
May 29, 2012 at 5:39 PM