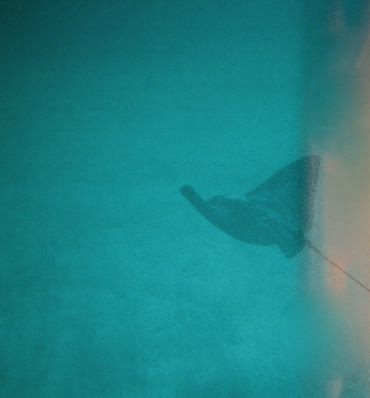 After a couple of cool days, it's hot as all get out again, and I've been dreaming of the beach.  Such a trip is not on the schedule as yet, so instead I've been glued to the Ustream camera placed in big "shark tank" at the Georgia Aquarium here in Atlanta in anticipation of The Discovery Channel's next "shark week" run.  The tank, which is the largest of its kind in the world, holds a couple of whale sharks and manta rays in addition to the usual array of blacktip reef sharks, spotted eagle rays, grouper, sawfish, and a myriad of other fish, many exotic.


It reminded me of this post I wrote a while back about the time I went snorkeling off the beach on St. Croix and got to swim with some spotted eagle rays.  So, since I haven't been writing today, I thought I'd bring it back.  Enjoy!


There are whole other worlds, alien worlds perhaps or just hidden ones that we don't know much about. For some folks, that alien world is outer space, for some it might be the desert or the Arctic or some other remote place on earth, for some it's other countries/cultures, for some it's underwater, and for some it's the spiritual realm or God's realm or eternity. While one can see images of some of these places in books or on tv/DVD (Planet Earth, National Geographic specials, and what I like to call "whale shows"), many of us long to actually experience them for ourselves. This is why people go on eco-tours, climb mountains, rappel into ice caves or pay to go into space.

I like to go snorkeling. This is a beach and/or boat related activity, good in warm weather and in clear water, and it offers an experience of being in another world. A few years ago, I had the privilege of swimming with a couple of spotted eagle rays off one of the beaches on St Croix. I had heard that eagle rays were making a pass through the area from another snorkeler, and although I've watched and petted rays at the various touch-tanks my son used to love to visit, swimming with them would be something else. I really wanted to see them. So I waded in near the place where they had been last seen, and I swam and swam and was just about to give up, when whoosh, two of them swam by just feet away, with wings outspread and rhythmically flapping.

I had gotten in without fins, and so I was hardly able to keep up with them, but I swam as fast as I could for as long as I could keep them in sight. I got a couple of pictures of them with my cheap underwater camera - this one had some crazy orange in it from sunlight or something and the second ray was blocked out, but you can see it's definitely an eagle ray (see the spots?).  I was thrilled that I had shared space with these two for a few minutes, and after they turned toward the open sea, I rushed back to shore to tell the family. But they did not seem to be particularly interested in what had been for me a truly meaningful experience.

I suspect that is true when it comes to entering into a spiritual place, too. Something about it is an internal event, even if it comes about from an activity that can be shared with others. Yes, we are Christians in community but there are also those times when in the midst of everything else, one senses that one has come into a thin place, a holy space, a whole 'nother world. And others may or may not be aware or appreciate it.

I suppose one has to have the eyes to see such a thing and the heart to want to see it, too....

Unknown said…
I like your comparison of the ray sighting with a spiritual experience. You can't always describe these moments to others in a way that they can appreciate your excitment or joy. Often, I feel G-d more during a hike or at the beach than I do in a synagogue or church, although there is a certain beauty in worshipping with others as well.
February 11, 2010 at 3:54 PM