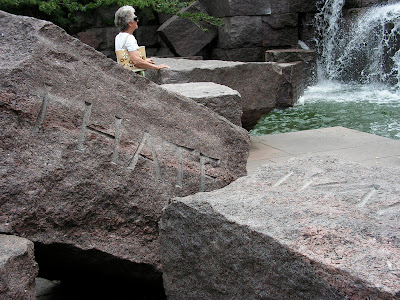 My mom moved here just about a year ago. She lives in a retirement center about two miles from my house.  She is happy there and has not looked back, knowing that she did the right thing by selling her old home and large property, even if it meant leaving many friends.  There is, after all, the telephone, and she has an unlimited long distance calling plan.

When she first moved in, I spent a lot of time with her, helping her with the details of setting up a new place, getting her finances in order, meeting new doctors, figuring out the grocery store and all that.  Once the initial burst of activity was over, I backed off, knowing she needed to be as independent as she can be and also so that she would develop new relationships.

Yesterday, I went over to visit her apartment, and she told me all the news of all the folks in her life these days.  The roster varies, as a few people have died or moved into nursing facilities and new people have moved in.  This is slightly disconcerting to her - as she has gotten older, of course these things happen, but in her old life, there was a mixture of ages and stages in her regular life and the changes were part of a much bigger picture.  Now her community is much smaller and more homogeneous, and the changes stand out.  But she mostly takes it in stride.  Mom's always had a philosophical streak.

Anyway, I enjoy listening to her talk about her friends.  Sometimes it sounds like my children talking about their friends when they were in kindergarten.  Some of her friends have lost their hearing or their ability to walk around unaided.  Mom herself has lost much of her eyesight.  She has learned that you need to give the woman in the motorized wheelchair a wide berth or she may run over your toes.  (The woman claims that people stick their feet out when they see her coming.)  She has learned that the ninety-two year old woman who sits with her on a bench outside the dining hall will ask very loudly why so and so walks like that or who was that man that just spoke to me?  She has learned that some of her neighbors often feel slighted by other residents (who in turn don't know what they did to upset them).

She has learned that many people just live in the moment and that her best response to everyone is kindness and generosity of spirit.   Except for when it comes to the way the chef prepares green beans.  She tells everyone, early and often, that he certainly does not know how to cook green beans.

What I enjoy about these conversations is seeing how my mom is so thoroughly engaged in her community.  She told me that they all care for each other there, as she recounted how everyone checked in and asked about her daily after she had a fall that bruised her up a little.  (Someone who can't see very well trips occasionally. She has strong bones, though, and has never broken anything.)  Yes, they all have their eccentricities.  Some of them are positively irritating - but then again, extreme behavior frequently is followed by an episode or health crisis.  She knows that people can lash out because they are ill or in pain or grieving.  She sees, up close and personal, people dealing with aging and failing health and end of life stuff.  She knows, thank God, that it's not her job to fix anybody there; she's there as a companion and fellow traveler on this part of the journey.

For many of us, it takes having lived through a certain amount of life to be able to do the dance that involves caring but not fusing, engaging but keeping boundaries, enjoying but not owning, holding things lightly and yet holding them dear, sharing even though resources (of all kinds) are growing thin.  I am enjoying seeing my mom in the light of this time and place in her life.

Ray Barnes said…
Sounds as though you have the formula about right Penny.
It is so important to offer help when you perceive a need and to know when to back off and let her stand on her own feet.
May we all be the recipients of caring and kindness when our turn comes.
July 21, 2011 at 4:02 PM

Perpetua said…
Ray is spot on, Penny. Getting the balance of care and independence right isn't always easy, but it sounds like you've succeeded and your mother is the better for it. Long may that continue.
July 21, 2011 at 4:10 PM