Counting in the "Gospel for Guys" 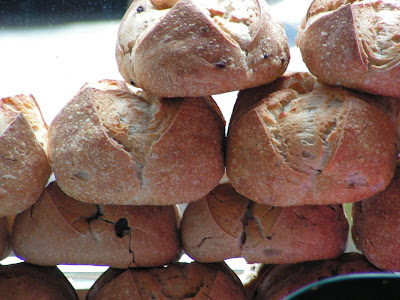 "Jesus withdrew in a boat to a deserted place by himself. But when the crowds heard it, they followed him on foot from the towns. When he went ashore, he saw a great crowd; and he had compassion for them and cured their sick. When it was evening, the disciples came to him and said, "This is a deserted place, and the hour is now late; send the crowds away so that they may go into the villages and buy food for themselves." Jesus said to them, "They need not go away; you give them something to eat." They replied, "We have nothing here but five loaves and two fish." And he said, "Bring them here to me." Then he ordered the crowds to sit down on the grass. Taking the five loaves and the two fish, he looked up to heaven, and blessed and broke the loaves, and gave them to the disciples, and the disciples gave them to the crowds. And all ate and were filled; and they took up what was left over of the broken pieces, twelve baskets full. And those who ate were about five thousand men, besides women and children."  (NRSV)


One of my very first sermons, in my very first class in seminary (Women and Preaching), was on this text.  I was surprised by my sermon, as were some of my family and friends.  They didn't know about that part of me, the preaching part.  I didn't know about it, either, really, but it was in that class that I began to truly believe (rather than "think") that I was called to the priesthood.

I won't repeat the whole sermon here (I'm not even sure where it is), but I will revisit a couple of highlights.

This passage, the miraculous feeding of the five thousand, occurs in all four Gospels.  It's the only "miracle story" that does.  But each Gospel writer included something particular in his telling of the story that connected back in to that writer's larger agenda.  The detail unique to Matthew is the specific inclusion of women and children among those who were fed.

I found that to be rather interesting, as I've always thought of Matthew as a kind of "Gospel for Guys."  After all, in Matthew, it is Joseph's lineage that is traced at the very beginning of the book, and the angel speaks to Joseph, not to Mary.  The introduction and story surrounding the birth are all told through the focus of Joseph.  No annunciation to Mary, no Magnificat, visit to Elizabeth, no pondering things in Mary's heart.  Instead, an annunciation to Joseph in a dream, the trip to Egypt, another announcement to Joseph via a dream.

Further, Matthew (and only Matthew) is where we find the slaughter of the innocents near the beginning of the story, and at the end, just as Jesus died, there was an earthquake that opened tombs, and (after the resurrection) the bodies of those whose tombs were opened came out, went into the city, and appeared to people.  These sound like descriptions of the kinds of "guy movies" that come on television after the ball game....

So, after all this focus on "guy stuff," here we have the only miraculous feeding story that specifically includes women and children.

I surmised at the time, and I still think this is so, that Matthew's community was feeling marginalized.  They were being, or had very recently been, pushed out of the synagogue.  Including others who were powerless and marginalized, specifically women and children (who were perhaps the posterpeople for powerless and marginalized in first century Palestine), made the point that Jesus included even those whom others didn't count in his gracious blessing.  The point would have been important to Matthew's community - that even if they were being pushed out by the "majority," they still counted and were legitimate in God's economy.

The world is full of people we don't count; this passage reminds us that they are still people.

Today as our national leaders continue to debate the future of our country's direction, and as some religious leaders have been protesting and contacting congresspeople to ask them not to balance the budget on the backs of the poor, not to gut programs that serve the least among us, this is an important message.  Jesus welcomed all who came to him and gave them sustenance.  He told his disciples, "You give them something to eat."

Dom said…
Very nice sermon! These days, we sure need to be reminded that the poor and the marginalized matter to God. (They certainly don't seem to matter to many decision-makers.)

By the way, I don't know which gospels are guy gospels, but I've always had a preference for John and Luke. John seems to have a philosophic and very symbolic bent. (And I really love the story of the Samaritan woman at the well.) And Luke seems to have a strong focus on social justice. Don't know which gospels the church emphasize, but John and Luke really resonate with me.
August 2, 2011 at 9:32 PM

Penelopepiscopal said…
Thanks, Dom! The church does not favor one gospel over another, although I know individuals who do. Most of us have one or two that particularly resonate with us. As for the gospel for guys, I was having a little fun in my women and preaching class with drawing a caricature.
August 3, 2011 at 4:08 PM