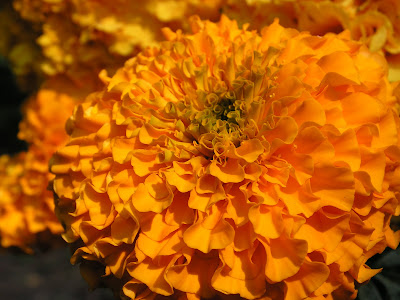 Some folks are predicting that the situation caused by terrible heat and drought in the southern one-third of the United States is going to rival the Dustbowl times of the 1930's.  According to an article in the New York Times today, fourteen states are affected. Farmers' crops are burning up in the fields and cattle are having to be fed (purchased) hay because the grass has dried up.  Buying and transporting the hay may well become too expensive an option and many cattle will be sold for slaughter.  And of course there is no state government money to assist farmers and herdsmen, as many states are teetering themselves.

So few of us live off the land these days, and the more graphic stories from the midwest and northeast about significant flooding this year that have caught our attention mean that many of us are simply not aware of what's going on with this drought unless we are directly affected.  And of course eventually we will be affected, when the impact shows up in the food supply - first with perhaps a glut of beef and then later a shortage as the nation's herds shrink.

But my heart goes out to the farmers and herders and their animals.  This is one of those cases where this prayer comes to mind:

O God, your unfailing providence sustains the world we live
in and the life we live: Watch over those, both night and day,
who work while others sleep, and grant that we may never
forget that our common life depends upon each other's toil;
through Jesus Christ our Lord. Amen.  (BCP 134)


So add these folks to your prayer list.  Our common life depends on their toil.

Perpetua said…
How dreadful, Penny. I had no idea the situation was so very bad. Prayers indeed.

Parts of France have also had no appreciable rain for over 3 months and are in the same situation of feeding winter feed to stock because there is no grass. There will be a lot of bankrupt farmers on both sides of the Atlantic, I fear.
July 12, 2011 at 4:08 AM

Penelopepiscopal said…
Perpetua, I didn't know about the situation in France, either. Farming is hard and it's no wonder that so many have given it up.
July 12, 2011 at 7:04 AM