A sermon about the weeds and the wheat 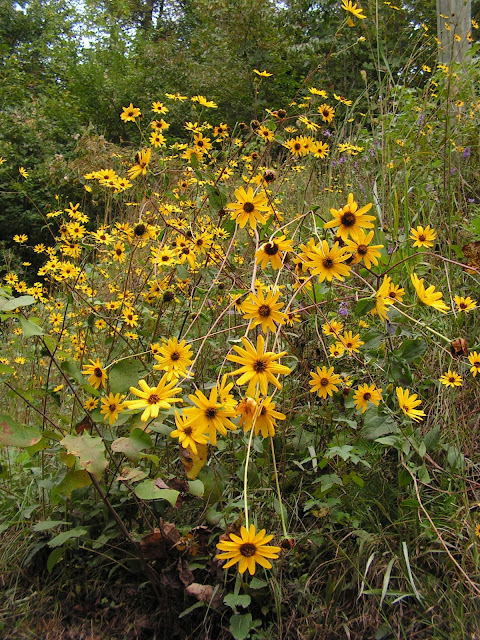 In the parable of the wheat and the weeds, we are confronted with several realities.

First, good and evil, as well as good and bad, and good and not so good, exist side by side.

Second, they are hard to tell apart until they are in full fruit.

Third, the good often gets damaged when someone tries to root out the bad.

And so, Jesus says, don't spend your time trying to root out the people you think are weeds in your community.  Good people will get hurt in the effort.  And it's not your job anyway.  Trust, rather, that in the end, God will make things right.

These are realities we have seen with our own eyes.  They point to the most basic "Why" questions we and all generations before us have asked.  Why is there evil in the world?  Why, if God's reign is near, and the world is already being made new, why is there still evil in the world?  We have seen it; the kingdom is not completely come.  We are called to trust that in the end, evil will be defeated and the good will remain, but somehow that still sticks like a craw in our throats.

Which leads to this question:  Is Jesus suggesting we just sit by and do nothing?

We can see this all around us.  There is armed conflict going on all over the world.  Our own country is involved in three wars right now.  When the U.S. military invaded Iraq  in 2003, our President announced that we were going to defeat evil.  But in that and every war from the beginning of time what we have seen is societies torn asunder, and we have mourned and continue to mourn the millions of innocent people killed.  Not just soldiers but civilians, men, women and children; not just military targets but schools and houses of worship and hospitals and homes are destroyed.  We call that "collateral damage" now, as if a change in the name changes the facts, but the reality is that God's people get hurt and God's people are killed in the quest to root out evil.

And of course we have seen purity movements as well.  In Jesus' day, the Pharisees tried to distance themselves from people they considered sinners, and the Essenes were so upset about what they considered abominations in the Temple priesthood that they went off into the desert to live in caves, keeping themselves to themselves.

Our world's history includes persecutions and efforts to rid society of people of other faiths, people considered infidels, people of other tribes, that resulted in massacres, ethnic cleansing and genocide - and in the name of religion.  Remember the Crusades, Bosnia, Rwanda and the horrors that continue in the Sudans.  Remember witch hunts and the Inquisition.  And of course remember the Holocaust.

It's a very ancient practice, kicking people out of communities large and small - from families, from groups, from countries - for fear of a taint that will spread by association.   My own family history and  stories I've heard from others include parents cutting off relationships with children, or sisters and brothers refusing to speak to each other, because someone disapproves of someone else's behavior.  There is a  deep-seated, ancient fear that we have to remove the ungodly from among our midst in order to keep God from destroying us all.

It's an ancient fear, and yet the whole story of Jesus shows us that that is not how God works.

Interestingly, the ancient Hebrews mostly considered purity to be a thing that was not about the person's being, but something that was on the outside like dirt or a crust.  Being in a state of impurity was defined by  rules and laws, and even inanimate objects could be defined as unclean.  Everyone was expected to have impurities, regularly.  That was just the way life was.  And the way to deal with  impurity was to remove it by way of rituals.  And even if someone had to stand outside the community for a short period of time, there were always ways for them to be able to rejoin the community.

But by the time of Jesus, things were a little more cloudy and even the Jewish community was engaged in shunning and denouncing,  putting people out, and even stoning them for their beliefs.   Look at Jesus himself, whom the religious leadership charged with blasphemy.  People were ostracized because of their work, like tax collectors, and despised because of where they lived, like Samaritans, and it was a scandal that Jesus associated with them.

It's a strong strong pull, that desire for purity, and it's potent, especially when it's accompanied by self-righteousness and indignation.

But hear what Jesus says.  It's not our job to go around yanking out the weeds.  Because people get hurt when we do that.  We will get mixed up in evil ourselves.  We are called to resist evil, yes, and trust that God will make things right in the end.  And in the meantime, we've got better things to do.

Does that mean our country does not go to war against an evil enemy?  People great and small have debated this question throughout the ages and we continue to wrestle with it still.  All I  know is that innocent people are always hurt and  society is always torn asunder because of war.

But are we to sit idly by while bad things happen to good people?

This, too, is such a hard question.  Deitrich Bonhoeffer likened Nazi Germany as led by Hitler to the situation of a madman driving a vehicle  into groups of people - was he called to comfort the dying or was he called to wrest the steering wheel away from the madman?  Was there a way to stop the madman short of killing him?

And yet we know that killing another person makes us killers ourselves.  That getting involved with evil can damage us so that in the end we might not be able to tell if we ourselves are wheat or weeds.  Think of the soldiers who come home with PTSD, who are unable to cope with life at home after what they have been through.  Think of the bitterness that takes root in the lives of people who have kicked someone out of their family in order to distance themselves from what they believe to be immorality.  Think of the hate that people spew towards one another as they proclaim the other to be a weed.  It becomes hard to tell the wheat from the weeds, and everything seems so messy and tangled up.

I don't think Jesus is suggesting we just sit there and do nothing, though.  People like Martin Luther King, Jr. and Mother Teresa and Mohandas Ghandi have shown us that non-violent resistance or working for positive change is not rolling over and doing nothing.

What Jesus does say is that, yes, there are always weeds but we've got other things with which to concern ourselves.  Tending to the weeds is not our job.

So how do we do that?

Well, as I said, it begins with focus and moves forward with action.  Looking for what God is doing in the world and then doing what we can to work with God in that endeavor.  We have to develop the eyes to see God at work instead of allowing our gaze to fixate on the stuff or people we wish would go away and infecting ourselves with bitterness and hate.  We have to learn to listen for God, to see God at work and then join God in that work.

Perhaps we regularly give blood in times of war (which is always). Perhaps we work in relief efforts after disasters.  Perhaps we focus on feeding the hungry and befriending the stranger and visiting the sick and providing sanctuary.  Perhaps we work on developing the courage to stand up for the least of these in the public square against those who would shove them aside like many clergy and religious groups have stood up in Alabama and Atlanta recently, in response to merciless immigration laws.

Perhaps we let go of our need to protect God from the ungodly.  (God doesn't need our protection.)

Perhaps we let go of our need to be saviors.  (We already have one.)

None of that is sitting idly by.

And so I go back to where I began.  In the parable of the wheat and the weeds, we are confronted with several realities.

First, good and evil, as well as good and bad, and good and not so good, exist side by side.

Second, they are hard to tell apart until they are in full fruit.

Third, the good often gets damaged when someone tries to root out the bad.

And so, Jesus says, don't spend your time trying to root out the people you think are weeds in your community.  Good people will get hurt in the effort.  And it's not your job anyway.  Your job is to work at building up the kingdom as well as you can, to bear good fruit yourself, trusting that in the end, God will make things right.

Perpetua said…
Superb, Penny! You write such good sermons and I really wish I could hear them preached. May your words bear good fruit and lots of it.
July 17, 2011 at 1:35 PM

Penelopepiscopal said…
Thank you, Perpetua - I appreciate your continuing encouragement! Perhaps one day I'll be in a place where I will record sermons....
July 17, 2011 at 2:11 PM