A sermon in response to the day of parables 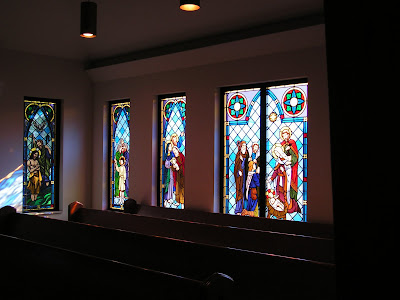 And then he said, "The kingdom of heaven is like hiding treasure in a field and then going to buy the field, even though you already had the treasure."

And  "Again, the kingdom of heaven is like a merchant in search of fine pearls who sells off his business inventory so that he can have one great big expensive pearl to take home."

And finally, "Again, the kingdom of heaven is like a net that was thrown into the sea and caught fish that you can eat and fish that you cannot eat;  when it was full, they drew it ashore, sat down, and put the eating fish into baskets but threw out the other fish just the way the angels will come out and separate the evil from the righteous and throw them into the furnace of fire, where there will be weeping and gnashing of teeth. "

Then Jesus looked at his disciples and said,  "Have you understood all this?" And they answered, "Yes."
Really?

Matthew talks about the kingdom of heaven but he doesn't mean "heaven" as in the place where God is or a place where people go after they die.  Matthew was a good Jew who didn't mention God's name too much.  And so the other Gospel writers said Kingdom of God and Matthew said Kingdom of Heaven but what they're all talking about is not a place but about what God's ways are like.  What God's values are like.  Jesus, as all the Gospel writers show in these parables and kingdom stories, goes around trying to explain God's economy - what our world would look like if God were running it - and he uses these kind of nutty examples to get us to see just how different God's economy is from ours.

Jesus wants us to see that God works through all kinds of obstacles and uses all kinds of vessels.  We might want or expect God to work through ancient and stately redwood trees or the famous cedars of Lebanon, but really those trashy old mimosa trees that grow up unbidden everywhere will do just fine.
Jesus wants to remind us that most things in life (people, institutions including church, and situations) aren't all good or all bad but a mixture of the two.  Everyone and everything has a shadow side; we can't make sweeping judgments about the good and the bad and we certainly ought not to get all caught up in purity movements, efforts to rid the community of undesirables.  Look at the horror that happened in Norway on Friday which appears to be just such an effort.  Jesus wants us to stay away from that kind of stuff because as we saw last week in the parable of the wheat and the weeds, these efforts of uprooting are destructive.  Jesus wants us to trust that God will sort it out in the end.

And Jesus suggests that truly following him will probably look ridiculous to other people and may well require sacrifice on our parts.  Sacrifice of place (Matthew's community was apparently put out of the synagogue), sacrifice of reputation, perhaps.  Of being thought of as weak, or kind of nutty, or even worse, the way Jesus was thought of because he not only associated with tax collectors and prostitutes but he loved them.  He didn't care about success in the eyes of the world and he didn't care about rules that others thought were terribly important, like healing on the sabbath or washing hands before meals.  He didn't care if you weren't supposed to touch lepers or let women touch him.  Jesus, eventually sacrificed his very life because of his breaching the social and religious rules. And although few of us will ever face that kind of sacrifice, some of his early followers certainly did.

So these parables are about the kingdom which is not a place but a framework for trying to get at what God is about.  Jesus tries to describe the indescribable by using these parables.  He tries to talk about something that's impossible to really grasp because it's so foreign to our understanding about how the world works.

And so when Jesus says, did you understand that, and the disciples say oh yes, we understand, I'm thinking, nah.  These are the same guys who want him to become a king, who want to sit on his left and his right, and who then desert him in his time of trial.

Because God's ways are not our ways and we have to be reminded of that over and over again.

And we say we want to follow Jesus, but we don't really want to give up our ways.  We want to assign our ways to God, instead, just like the disciples wanted to make Jesus a king because they understood kings.

By way of these odd parables, Jesus is trying to wake us up.  Trying to let us know that we need to pay better attention to the world around us.  God's ways are unexpected, often hidden and yet very near, and so we need to be awake to wonder and possibility in order to discern God's work in the world.   When we see the equivalent of a mimosa tree in the middle of a cotton field, we need to be able to look with wonder instead of immediately dismiss it as out of order.

If you ever attended All Saints' on Easter Sunday during the days when Harry Pritchett was rector, you know that during the service Harry always came out with his ukelele and sang a children’s song he wrote back in the 1980's.
It goes (partly) like this:

Moses tended sheep upon a mountain top.
He hardly noticed when a burning bush said, “Stop!
Set my people free, take them to my land.”
“That couldn’t be my God,” he said, “He’d have a better plan.”

People of Israel were looking for a king:
If God would save that way, the freedom bells would ring.
Along came Jesus, a man who’s poor and weak;
“He couldn’t be our God,” they said, “He’s nothing but a freak!”

Peter and the rest of that straggly little band,
They all ran away when darkness hit the land.
Whoever heard of a humble, bungling boss;
“He couldn’t be our God,” they said, “He’s landed on a cross.”

Seek our God in hope, moving as He goes
With judgment, grace, and love in anything that grows.
In anything at all He suddenly may be,
‘Cause everything is His, you know, even you and me......

Can we understand God's ways?  I think the more important question is, are we willing to be open - to make room for God's surprising and unexpected ways? Can we learn to apprehend God's ways, to appreciate them, to be grateful for them, even if we don't completely comprehend them?

Well, as the song says, we’ll have to open up our eyes and see.

Kay Guest said…
As great as this sermon is to read, it was even better to HEAR It! And to hear the song too!
I love your photo of some of our stained glass windows at St. Simon's. Thank you!
Kay (an ABSORBER, not a lurker)
July 24, 2011 at 5:43 PM

Penelopepiscopal said…
Thanks, Perpetua! I loved singing the song on Easter for several years! It really helped me develop my theology of how God works in our world.

Kay, I'm so glad we got to chat this morning! Thanks for your encouragement. And yes, I have several photos of St Simon's that will occasionally show up here.
July 24, 2011 at 5:54 PM