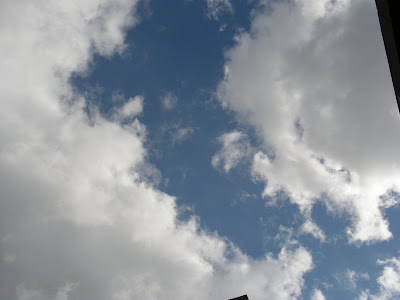 Normally, the July skies over Atlanta are hazy and smoggy.  But a lovely cold front came through a few days ago and brought with it blessedly cooler temperatures and blue skies.  The kind of sky we have in September - high and bright - with some fluffy clouds.  What a gift, and a welcome one since our July temperatures and skies commenced back in mid-May.

The other thing we have in Atlanta is lots of traffic.  That is no different now, despite the break in the weather.  Yesterday, driving home from church, I got caught in a slowdown caused by a paving project on the interstate.  Instead of fuming, I decided to look at the sky through my sunroof.  It was beautiful.

The first thing I saw were planes taking off and landing at the airport up ahead.  I liked the angle they presented as they sped toward the clouds.  I sort of wished I was on one of them, going somewhere.

The next thing I saw was a red-tailed hawk circling overhead.  How did I know it was a red-tail? The sun caught the orangey, fanned-out tail feathers.  I expect it was hunting, as it seemed to be honed in on a particular area.

And then I just looked at the fluffy clouds.  I thought about how when I was little, we kids thought that angels sat on those clouds or that God used a cloud like a chariot or magic carpet.  And then when we were bigger and knew that clouds were vapor, we were disappointed.  Angels or God would surely fall through vapor, but no alternate setting came to mind.

I need to look up more often.

Ray Barnes said…
I agree, looking up gives a new perspective and sometimes can add something beautiful to an otherwise mundane day.
Just remember to stand still while you look up, Failing to do so could be disastrous!
July 18, 2011 at 5:22 PM

Penelopepiscopal said…
Ray, the same is true for looking down - when driving downtown I really have to watch out for pedestrians who are texting while walking.
July 18, 2011 at 6:12 PM