Do Not Worry about What You Will Eat, or Wear, or How You Will Live .... 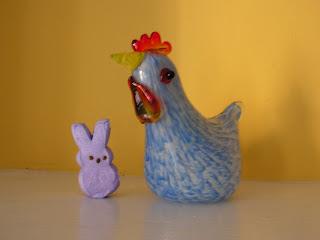 Today is "no worries" Sunday.  Maybe that's not the official name, but it seems to be so, if you prayed the collect for the day (see previous post)  and read the readings for today (see them here).  Through the prophet Isaiah, God tells the Hebrew people - who have seen their land overrun by Babylonians, their temple burned, and suffered being hauled off to exile in Babylon by the soldiers of King Nebudchadnezzar - not to think that God has deserted them, for God loves them like a mother loves her child and has written them on the palm of God's hand.  Jesus, too, tells the people around him not to worry about what they will eat or wear, not to worry about their lives, for God will give the what they need.  The God who has created the world and clothed it in God's own beauty and mystery loves them and will not abandon them.

Of course we all still have our worries.

One of the primal worries of human beings, a worry that we experience almost as soon as we are born, is that we will be abandoned.  Many therapists have spent their whole careers working with people who have "abandonment issues."  And that's just the people who are willing to get help.  Untold numbers of other people with abandonment issues are roaming around in the world every day, worrying that they will be left, that no one really loves them, that they will be left to their own devices to deal with absolutely everything that comes along.

And even those who do get help need regular reinforcement or the worry slides right back in.  Does anybody love me?  Does anybody care whether I live or die, whether I flourish or languish, whether I thrive or wither away?  And if somebody does now, will they always, or will they discover all my flaws and my deep imperfection and then leave me?  Am I worthy to be loved?

These are our deep seated worries.  That we are not worthy, that we will be alone to deal with everything the world dishes out, that nobody cares, that we will be thrown away when our weaknesses are discovered.  We may say that we are worried about other things, but this is the crux of the matter for so many of us.  We don't want to be abandoned.

I was thinking as I was listening to the Gospel being read in church today that we could listen to these words of Isaiah, these words of Jesus, this collect, every month and that wouldn't be too often.  To hear the comfort - God loves what God has made, God cares, God will not abandon us, we don't have to worry about our ultimate fate - over and over again until finally it sinks in.  I was glad to hear the sermon on that very topic.  We all have worries, but God is with us, and we although have to look for God, we do so with the certain knowledge that God is there somewhere; God has given us the eyes to see if we will but open them and see.  Because we are not alone, uncared for, even when it seems as if we are.

I heard, a few days ago, an interview on NPR with someone from Amnesty International (I came in late and didn't get all the details so I can't provide a link to the story) who told a story about a man who had been imprisoned.  His captors hauled him out one day to interrogate him about his friends in France.  The prisoner stated that he didn't know anybody in France.  And in fact he didn't.  But the captors shouted at him, yes you do!  What about all those postcards you get every week from those people in a village in France?

The prisoner had never seen the postcards, but they were the work of many people who, through Amnesty International, had adopted this prisoner and kept sending him cards to let him know that they were thinking of him, that he was not forgotten.  When the prisoner heard about the cards and finally saw them, he later reported, it changed the way he lived in his cell.  His captors had told him:  You are forgotten.   Nobody cares about you.  You will not be missed.  Nobody is going to come and save you because nobody cares about you.  But it turns out that he was missed, many somebodies did care about him, even though they didn't know him, and wrote to him regularly to let him know that he was missed and he was cared about.  It meant the world to the prisoner, who was eventually released.

The man on the radio interview said, this is one of the important things we do at Amnesty International.  We work to keep people from being forgotten, left to languish and to die.

And this is why there are so many people who visit and send cards and call and bring animals to mingle with elderly people who live in assisted living and nursing homes.  To remind those who are no longer able to go here and there, and maybe feel imprisoned by weak bodies and minds, that they are not forgotten.

Because we will languish and die if we think we are forgotten, unworthy of notice, abandoned.  But God has made us worthy, as we say in Eucharistic Prayer B in the Book of Common Prayer.  We are not forgotten, for God remembers us as God remembered Noah, and the promises made to Abraham, and the people enslaved in Egypt who cried out, and the people in Babylon living in captivity, and Jesus on the cross, and you, and me.

Penelopepiscopal said…
Isn't the lectionary wonderful? It's so nice for all of us to read the same Scripture every week.
February 27, 2011 at 8:19 PM