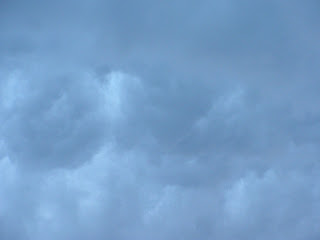 We had a strong band of thunderstorms come through town early this evening, along with a wind advisory and tornado watch (as opposed to warning).  Nothing much happened in my neighborhood except that the internet got all wonky, but the timing was difficult because the storms came through during our rush hour (which lasts for several hours, actually).  I was already at home and didn't have to be out in it, fortunately.  But I gather from Facebook and other sources that some friends and neighbors spent some time in their basements, just in case.  Our basement is not fit to set foot in (it's a dirt basement), so I am glad that no basement was needed at our house.

There are storm clouds out there in all kinds of areas - the Arab world, for instance, which has seen a wave of revolutions with the latest one (in Libya) seeming to verge on civil war.   The kinds of peaceful demonstrations that brought about real change in some countries have been met in Libya with violence as the country's rather bizarre dictator (did you listen to any of his speeches?) has ordered the army to shoot at the demonstrators.  Blood has been shed, and so it is a different game now.  Lord have mercy.

A segment of the religious world, too, seems to have gotten its knickers in a twist about a guy named Rob Bell who has written a book (that has not yet been published and so nobody has read it yet) which some people are bashing because it apparently advocates a theology of universalism (but see previous parenthetical statement).  Universalism is the heresy, if you're into delineating things into such categories, that says that everyone is able to be saved or is already saved.  Twitter was all aflame in the last day or so either denouncing or supporting Bell, whose book, I will remind you, has not come out yet.  The name of the book, though, is Love Wins, which suggests that Bell may champion the notion that love trumps doctrine every time (although one witty person has suggested that it actually is about the Georgia golfer, Davis Love III, who won the PGA championship in 1997).

By far the best commentary I have seen about this tempest can be found on the British author and theologian Maggi Dawn's blog, which you can find here.  I hope that she will write another post based on this paragraph:

His opponents are assuming that he is going to give a Universalist answer; others are mistaking universalism for pluralism (not the same thing), but they are very bothered that Bell might be going to suggest that whatever you think or do, you’ll end up in heaven anyway. And they are hopping mad about it (and this makes me wonder why some people are so anxious to keep other people out of heaven… but that’s another can of worms).

I am glad that the local storms here passed over without damage.  Rob Bell, I think, can take care of himself.  But pray for the people of Libya.

Nancy Wallace said…
It's extraordinary how quickly some people jump in to criticise the supposed content of a book they haven't read yet. All the fuss about Rob Bell's book has made me want to read 'Love Wins' when available - even negative publicity helps to promote book sales I suppose.
I've just discovered your blog (via your comment on Maggi Dawn's blog) - had a quick browse - love the way you link your photos to prayers and reflections.
March 1, 2011 at 10:44 AM

Penelopepiscopal said…
Welcome, Nancy, and thank you for visiting! I am glad you like the blog - hope you'll come back often, as we say in church.