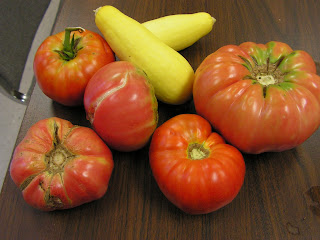 I just read this lovely little essay by Giles Fraser, a CofE priest and writer, in The Guardian, about being called upon to say grace before meals at official functions of various sorts.  He quotes a bit from another, much older essay by the formidable Charles Lamb, suggesting that saying grace before a huge fancy meal is something like blessing an orgy.  Fraser disagrees (as I do), believing that since prayer forms us, it is meet and right, as they say, to stop before meals and remember that all we have is a gift from God, whatever the purpose or form of the meal in front of us.  Because the point is remembering and recognizing that (and what) God provides.

When I was a little Sunbeam in Sunday school, we memorized (among many other things) a table blessing, which we basically chanted to an internal, sing-song beat.  It goes like this:

God is great, God is good.  Let us thank him for our food.  By his hands we all are fed; give us Lord our daily bread.  A-men.

You can get the beat right if you tilt your head from side to side on the 1 and the 3 and the amen has to be two strong beats.   That's old school, I know.  Post Elvis, we're all about the 2 and the 4.  But I digress.

Occasionally, I would be called upon to recite this blessing before a meal at home, but not often.  It was understood that my dad, as the head of the household, would be blessing all meals, and in his absence my mother.  I never quite memorized the one they said, although it seems remarkably similar to one of the blessings before meals in our prayer book (Bless, O Lord, thy gifts to our use and us to thy service; for Christ's sake.  Amen.  [BCP 835]).  He had a longer one that he used for larger (perhaps holiday) gatherings around the table, but mostly he used the everyday prayer, which I must have felt was a grown-up prayer for which I was not old enough to say yet.


When it became known that I was preparing for the priesthood, I was frequently called upon to say grace at various gatherings.  I remember being told by discernment mentors to expect that to happen.  For some reason, people seem to feel that the food is blessed more properly by someone "holy."  I have never felt that I am more holy than anyone else, and in fact often feel that others are surely more holy than I, but I know that there is some feeling by friends and acquaintances of wishing to recognize and respect an office.  Or something like that.  And I would say grace if asked (I never ask to do the honors); and often I would cast about in my mind what I should say, what should be MY prayer before meals.  But when I went home, it would be my dad saying grace as head of the family, and then after he died, my mom.

We are formed by our prayers, both the words, the form, the simple saying of prayers in certain situations.  The fact of saying grace before meals gets into our bodies, as do the words of thanks and praise.  I haven't said that child's grace in 40 years but it came right to me, head tilts and all.  Because I was formed by saying grace before meals.

masweet said…
God bless this food to our bodies, and our bodies to your service. In Christ's name we pray, Amen.