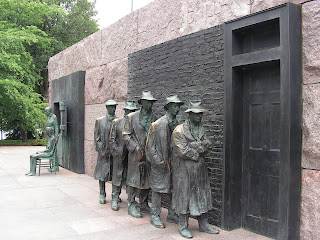 Our baptismal covenant calls upon us to respect the dignity of every human being.  I am glad that we say this out loud in front of God and everybody several times a year; I know I need the reminder that this is part of my job description as a Christian.

But I am not sure that I always fully appreciate what that ought to look like in my regular life.

I am reading a truly wonderful book called Horizons of Mission by Titus Presler.  It's part of the New (Episcopal) Church's Teaching Series and nearly every page has me whipping out the highlighter and making notes in the margins - remember this!  yes!  stars * and exclamation points!  While I am not going to review the book here (I may later, after I've finished it), I will just say that Presler's overarching theme is that mission is what we do in witness to our faith and that everything we do is mission because as Anglicans, we primarily understand our faith as incarnational, embodied.  Therefore, we are all missioners everywhere because we are all embodying our faith every day.  The book unpacks what that means in all sorts of venues, from the local neighborhood to other continents in the midst of other religions.  It's fascinating.

But back to the respecting the dignity part - in one of the historical chapters, Presler acknowledges that for a long time, missionaries were thought to be transmitting not just Christianity but also Western culture to the people they lived and worked among.  One can find in the church archives writings from institutional higher-ups that clearly denigrate not only the religions but also the cultures of people in Asia, South America, Africa, Oceana, as well as North American indigenous peoples.  Presler says that there was an impulse for Victorian missionaries to put clothes on South American people or to teach wood carvers to make European musical instruments instead of their own.   The implicit message was that these people did not already have a meaningful culture and that Westerners had to enlighten them to the one true religion and the one true culture, which was White European (male dominated) Culture.  And that there were two parties:  givers and receivers.  One always gives (the White Europeans) and the other always receives (unenlightened heathen types).  No sense of mutual relationship and appreciation.

As I was reading, I recalled a conversation from years ago about the best way to help children who live in poverty.  I mentioned reading somewhere the bald statement that if one wants to help children, one needs to help the mothers of the children, that babies and children can't be treated as if they are not embedded in families of some sort.  The other person stopped and blinked at me and then said something like, "Thank you for saying that.  I guess I don't like the idea of helping the mothers because I disapprove of their lifestyles, having babies out of wedlock you know, and so I just want to help the babies because they can't help what their mothers did.  But I guess I didn't think about the fact that what I'm advocating, really, is to step in and effectively take over the providing and parenting myself.  You are reminding me that these are not my babies, that these babies already have mothers."

Respecting the dignity of every human being is not only about seeing everyone as a child of God but about respecting the dignity of human endeavors and cultures and practices, even when they feel foreign to us.  Every human being is embedded in a family and a culture of some sort, and it is to our detriment when we cannot open ourselves to appreciate other cultures even in our own increasingly diverse communities.  I recognize that I need to work on that over and over again, to see other ways of doing and being not as competition but as complement.  That respecting the dignity of the person and the culture in which the person is embedded means I might learn something from that person and their ways of being and doing.