It Takes All Kinds 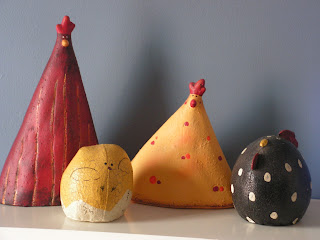 I think it was one of my grandfathers, or maybe a great-grandfather, who, according to my parents, used to frequently say, "It takes all kinds to make the world go 'round."

Which is a true statement.

Of course, as I look back, I realize that frequently a short version of this quote ("it takes all kinds") might be brought out by members of my family (including me) as a comment upon someone who looks or has done something "different."  It wouldn't be (exactly) a haughty dismissal or spoken (always) as an accompaniment to some eye-rolling, but it wouldn't be a compliment, either.  The eye-rolling might be implied; the dismissal might be just barely hinted at.  But still, it was an attempt to recognize that, "hey, you are really weird" or "what a crazy thing to say or do" or "just what is up with you and your purple polka dot house anyway?"are all a little judgmental and maybe we could just, by stating "it takes all kinds,"comment neutrally about people who are, indeed, different from us.

I think it's good to try to be at least neutral about differences if we can't be enthusiastic.  Deep down inside, however, we really don't like people who are different or things that are different from our things or from the way we do things.  We may say we just don't understand them.  Mostly, I suspect, it's because we are afraid they may be better than we are, and so we would rather not like them or like their preferences.  Or understand them.

Even worse, what if we are wrong and they are right?  This is scary; it causes anxiety.   So let's just dismiss those who are different and be done with it.

But my grandfather, or great-grandfather, was right.  It does take all kinds to make the world go around.  If we are made in the image of God, and we are introverts and extroverts and ectomorphs and mesomorphs and blonde, brunette, redhead, male and female, be-ers and do-ers, eaters of escargot and lovers of fish sticks, drinkers of Coke and drinkers of Pepsi, homebodies and adventurers, contemplatives and people who have trouble with contemplation ...... well, obviously we are all different and that's really ok because we are all part of the humanity that bears the image of God.

It also seems to be human nature, though, as different as all of our natures present themselves, to create dichotomies unnecessarily.  If this is right, than that is wrong.  If your way is the right way, then my way must be the wrong way.  If heaven is for Christians who profess Jesus to be their Lord and Savior then everybody else must be going to hell.

Why is this?  What is it about human nature that we can see with the naked eye that there are many different kinds of people, thoughts, philosophies, governments, religious practices and yet we act as if  only one of them is right and all the others wrong.  Only one recipe for spaghetti, only one way to pray, only one kind of marriage, only one way to heaven.  Why are we so determined that love is a zero sum game, that heaven has a limited capacity, that life must be lived according to one set of rules?  This damages other people when we insist that they have to go against their own natures to conform to some idea of what is right and what is wrong.  Think about all those kids whose parents and teachers forced them to learn to write and eat and do everything with their right hands when they were clearly left-handed.  Left handed people were, in the Middle Ages, branded evil and could be put to death!

What kind of God do we profess, when we say that we are all made in God's image, and then determine for ourselves that God will not accept those who don't act/believe/worship according to a particular standard (the same for everybody)?  We are the ones who seem so bent on excluding others and then claim that God wants us to do that.

God made us in all kinds and it does take all kinds to make the world go 'round.