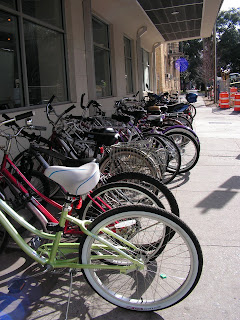 On Saturday, I watched a bunch of eight or nine year old girls playing a church league basketball game.  I sat on the side that had a lovely, low-key, very smiley coach who completely understood how when a player got an elbow in the head, she needed to run up the bleachers to sit with her mom until she was ready to go back in.  Who was only a little frustrated, but not angry, when a player got called for traveling because she caught a pass (one of those high, arcing ones that look like a softball pitch) on the run and because of her cute (but not basketball) shoes just kept sliding for a yard or so.  Someone would heave the ball up and if it went in, everyone went nuts, from both teams.  The final score was 10 - 8, I think.

It also reminded me, however, of my days as a young athlete.  Actually, athlete is hardly the word one would use to describe me at any age.  I could ride a bike and a horse, hit a golf ball, swim and dive and do yoga, but when it came to team sports, I was a fish out of water.  As in, completely disoriented, gasping, and feeling as if I were dying.

So I loved watching this coach on Saturday.  He never stopped smiling, never yelled at the kids, cheered for any goal that was scored by either team, and seemed just happy that the girls were there to play, whether or not they were wearing the right shoes or pants or whether they forgot to pull their hair back so that they were shooting free throws with hair in their mouths.  They could figure out that stuff on their own, if they wanted to.

Anonymous said…
As someone very close to you, I am personally grateful that you did not choose to contrast the positive behavior and amiable attitude of the coach of the girls' team with that of the coach of your son's team in the game that immediately followed.
February 15, 2011 at 12:14 PM