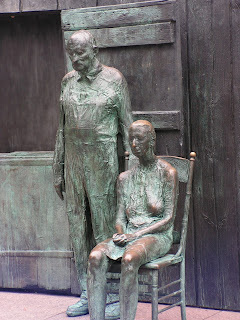 I did not preach today.  Instead, I was privileged to hear my friend Elizabeth preach.  This is one of the things I like about my current work, that I am able to attend different churches and hear my colleagues' sermons.

Today's Gospel text is Matthew 5:21-37.  Read it here.  This is a text that is part of the Sermon on the Mount, after the Beatitudes.  If Matthew's goal is to show Jesus as the true interpreter of the Torah (and not creating a new set of laws), then these statements of Jesus are intended to be his interpretation of some of the most difficult issues of the day - murder, anger, lust, adultery, divorce, and, perhaps curiously, proper speech.   He points out that anger lies at the root of murder, that lust at the root of adultery and divorce and also says stuff about how you might end up in hell for saying "you fool" and that you ought to pluck out your eye rather than go to hell for lusting after women.  This is a long passage and it's full of the kinds of things that make people really nervous and anxious.  When Jesus talks about people going to hell, we sit up and listen with great trepidation.

As the gospel was read, one could feel the anxiety rising.  Here's that passage that condemns all of us.  Don't even get angry?  Pluck out your eye?  Divorced women are actually committing adultery if they remarry?  Lust - even Jimmy Carter admitted to this one in front of God and everybody.  How are any of us to escape the hell of fire?  Because there's a lot of going to hell in this passage.

And then the preacher mounts the pulpit.  I've been this preacher on other occasions and I was wondering what Elizabeth would choose to say today.  And she said this:

She preached about reconciliation.  She talked about a woman who, after significant struggle, decided to meet and get to know and eventually advocate for the man who killed her young adult son.  She talked about the Truth and Reconciliation Commission in South Africa, the work of Nelson Mandela and Archbishop Desmond Tutu.  She talked about how hard this is: how the woman was criticized by other family members for "dishonoring her son's death;" how hard it was for murderers to tell the stories of what they had done; how hard it was for victims and their families to listen.  How hard it was and it is to decide to forgive, to let go of victimhood, of anger and rage that eats us up, to be reconciled with those who have injured us.  She called Mandela and Tutu and the woman Superheroes for what they were able to do in the face of horrible wrong-doing, violence, oppression, death.  Elizabeth wondered whether she would even be able to do such a thing herself.

As I listened to Elizabeth's sermon, I thought, "Oh, how I wish that this was the way we did theology in the public square."  I'm not sure what "we" I mean exactly, but it seems that so much "Christian talk" (both in and out of church) puts so much focus on hell, and on sexual behavior that condemns (other people) to hell, almost constantly.  Almost never is the focus is on reconciliation.  Elizabeth read through that daunting list and had many things to choose from, many things she could have talked about, things that lots of people talk about over and over, but she chose to talk about reconciliation.

Because Jesus is all about reconciliation, that's the big picture in the Gospels.  Yet Christians so often choose to spend much more time and energy on whether or not people are going to hell because of this or that behavior.  (And a close reading of this passage from Matthew makes it clear that we all are guilty of these behaviors.  No one is exempt, although we try to find loopholes so that we can say we are not guilty of the things we condemn others of doing or being.)  Occasionally I hear a Christian leader just say matter of factly that certain people are condemned - that's what the Bible says, and really there's nothing much else to say.  Sorry.  And I get furious.  Because there is a lot more to say.

People are hurting.  The world is broken.  People are lost, they are bereft, they wonder if there is any meaning to this life at all, they are nearly overcome with worry, questions, hurt, grief, meaninglessness.  Jesus was about reconciliation.  The church is supposed to be the sign of reconciliation in the world.  We ought to be in the business of reconciliation rather than condemnation.

And so, I am grateful to my friend Elizabeth for reading through those many verses in Matthew today and choosing to lift up the part about reconciliation.  Well done, good and faithful servant.

Ray Barnes said…
Very helpfull approach to the thorny problems of 'sin'. If the sermon I heard yesterday had been half as good as Elizabeth's, I would be feeling a lot happier today.
Thankyou as ever, for hitting the nail on the head.
Blessings Ray
February 14, 2011 at 2:04 AM