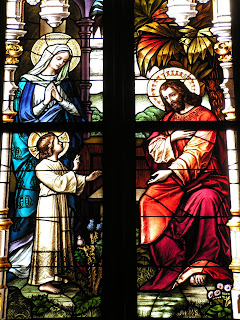 Twenty years ago the conversations were about naps or diapers or feeding or daycare/mother's morning out.   Then we moved on to schools and extra-curricular activities and then on to learning issues and adolescence and preparing for college and dealing with college stuff.  Kids have been leaving home, at different times and for different reasons, and many kids have returned home for a season here and there as well.

These days the conversations are about these leavings and returnings, preparing for them, experiencing them, coping with them.  About how hard these times are because we aren't sure we know how to be mothers to kids who are independent now, who have confidential relationships with counselors or doctors or even schools.  At one point I said that I feel as if I am always trying to find the line between too little and too much.  I suppose it is always that way with parenting, but the stakes seem so much higher when they are driving, choosing college, moving away, getting jobs.  And the limits of our responsibilities, rights, obligations, desires even, have become more obvious.

Today I happened to meet a new mother - that is, one previously unknown to me but who has a son just a year or so older than my elder son - and to reconnect with a mother I've known for more than ten years but haven't seen in six, who has a daughter between my sons' ages.  The first conversation was a blessing to me, an opportunity to hear another mother's story about a child returning home.  The second conversation gave me an opportunity to give support to the other mother, to pay it forward, to tell about our experiences that might shed light on their preparation for going forward toward college.

In church, after both of these conversations, I watched and listened to my younger son singing in a combined choir - the middle- and high-school kids and the adults together.  He's taller than most of the kids and the adults and he sings bass.  And yet he's just sixteen.  It was a picture of what his life is like from my perspective as his mother: he is part youth, part grownup.  He can and does do grownup things, and yet he is not completely launched yet.  He is still under his parents' supervision, but for less time and fewer things.  I was grateful to be sitting with the other mothers during the first service; we looked together from our row at our own children and at each other's children and the same thoughts were surely passing through all of our minds.  And I was grateful to be sitting with my husband during the second service; only he shares with me the reality of our own family dynamics in all its gory/glorious detail.

My prayer can only be now that he will grow into who God made him to be, with God's help, with the help of his parents and family and mentors and teachers and friends, with the presence and prayers of those other mothers who, whether they know it or not, have always been part of his support and formation.
Email Post
Labels: family for those we love prayer the journey