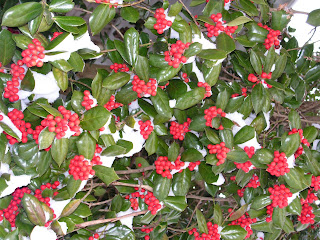 It appears that there is such a thing as too much togetherness.   Five days of being cooped up together in the house have caused tension, if Facebook stati are to be believed.

Mature ways of dealing with this tension include going out to shovel snow and ice - your own driveway and sidewalk or the neighbors' or just out in the street.  Shoveling is a great tension-reducer.  And it is neighborly to boot.  As temperatures rose today and a little thawing began, such an activity was a real possibility for many neighbors this afternoon.

Another coping mechanism is to go in your room and shut the door and stay in there, no matter what you hear going on elsewhere in the house.  Those of you who need to heed this advice know who you are.

I bought some birdseed while I was in the pet food aisle.  Our birdfeeder is mostly broken (thanks to marauding squirrels) and our neighbor has a couple of very popular birdfeeders plus the neighborhood cats often stalk ours, but I was moved to buy it when I remembered a scene from thirty years ago.

I was living in New Jersey, and we had a major winter storm - it was predicted to be, and ended up being, something like sixteen inches of snow.  I'd never seen that much snow in my whole life.  My apartment was just a block or two away from a grocery store, and as the snow was beginning to fall, I walked down there to buy the usual snow day supplies (Why do people always stock up on bread and milk?  I don't even drink milk.).  The store was just jammed full of people and the aisles didn't really accommodate all the carts, and some shelves were already cleaned out (probably bread) and frustrations were running high.  Everyone wanted to get checked out and get home and could we all just please hurry up with it?

Carts were piled high, and I was in line with my milk or bread, but there was one man in our line who seemed to have very little in his cart and he was moving rather slowly (he was elderly).  Someone ran into him with their cart, trying to go around the end of an aisle, and he was polite, and she was less than polite and wondered loudly as she rattled by why he needed that big cart for just one item.  Curious, I leaned around so I could see what his one item was.

"All of them look to you to give them their food in due season.
You give it to them; they gather it;
You open your hand, and they are filled with good things."