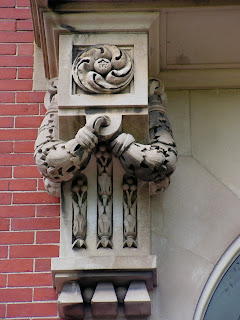 This is an architectural detail on the music building at Brown University, but for some reason it looks like an artsy, flowery (perhaps even female) R2D2 figure to me.  The Jetsons may have had Rosie, but this is Rosie after a makeover.  A Rosie who stands ready to help in an old-fashioned, Secret Garden kind of way, with her hands clasped just so.

There are times when I think it would be good to have a helper of this sort.  One that could do the ironing, shop for groceries, basic cooking, buy stamps and mail packages, and clean the piano - stuff that needs doing but I just find tedious.

Of course when we think of such helpers, or at least when I think of such helpers, I only think of how they can help me.  That's the beauty of the robot part.... this Rosie doesn't need to be taken care of, small talked with; she will not wish to borrow money or have a drinking problem or take time off when it's inconvenient or park her car behind mine in the drive way.  She will exist solely to help me.

Now, let's look at the robots we know.  Rosie, R2D2 and CP3O, HAL, and Robot on Lost in Space.   They all ended up being anthopomorphized.  They have faces and personalities (HAL was not very nice, Robot even played the guitar and sang).  They think for themselves, and act according as if they have their own wills rather than limited and specific programming.  I suspect most of us really wouldn't really be that interested in a robot without a personality - that would just be a Roomba.

As I often say, this is because we are made for connection.  We are made for relationship.  We don't have a Trinitarian God for nothing.  Like infants, we look for faces everywhere (I love "happy chair is happy" photos like this one!) and try to relate to them or at least read their expressions.  Cars have eyes instead of headlights.  Airplanes sometimes have faces literally painted right on them.  We draw :-) and :-( and :-/ on our emails and Facebook comments.  Give me some(one)(thing) to relate to!

If I had this Rosie at my house, we'd have tea, we'd watch movies, we'd cook together; she would listen to me and I would listen to her.  And maybe we'd do the tedious chores together, to make things less tedious.  Ah, that would be nice.