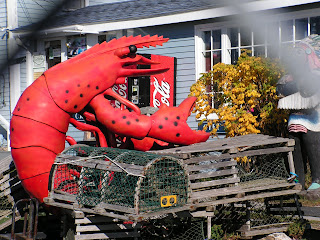 For many years now, our family has eaten Sunday lunch at the same restaurant nearly every week.  This habit started when the kids were very young and we were finished with church and Sunday school around 11 a.m. and needed to find a place that was open that early on Sundays so that people would not get cranky about being hungry. (I'll leave it to your imagination as to whether or not the cranky people were the adults or the children).  We quickly became known to the proprietors and the various wait staff, since we were often the first customers, and we came every week, and we always ordered four sweet teas.   New waitpersons would sometimes quickly arrive at our table with four glasses of sweet tea (a Southern delicacy) and with a slightly questioning look announce that s/he was told to bring it to us, obviously wondering if s/he was being subjected to some sort of restaurant staff hazing or at least having a joke played on him or her.

Our younger son would usually be wearing his name tag from church, his name first neatly printed by teachers and then scrawled in his own hand.  One of the waitpersons, Soula, became like a godmother to him, always calling him by name and occasionally arriving at the table with a lovely dessert called a moussemouse (complete with M&M eyes) or sometimes a piece of baklava for him to share with us.   Everyone knew us, probably including the cooks because for years we ordered fried calamari for our appetizer as soon as we arrived.

As time went on, the children grew, I had to switch to unsweet tea (just not the same, I know, sigh) and cut back on the calamari, and I went to seminary and became a priest, and so my Sunday lunches were often eaten elsewhere, but the family continued the tradition.  Sometimes I would come on other days, with other people, but I was always welcomed the same way.   I can miss seventeen Sundays in a row and be greeted by Soula with a kiss on each cheek whenever I do return.

And then one son went to college, and came back, and went again, and different wait staff came and went, and daughter and son in law sometimes came, and our neighbors sometimes joined us and somehow the whole thing still worked like family.  One Sunday a couple of years ago, before older son went to college, both my husband and I were away, and so our boys got into the minivan and drove themselves to church and then to lunch at Athens Pizza because that's what they do on Sundays.

From the very beginning, while we ate, we always talked about the morning - what did the kids do in Sunday school, what did they think about the church service - the music, the sermon, the great organ, and then later the escapades around the altar as both boys became acolytes.  We talked about Bible stories and about what we thought about the difference between history and mythology, about foundational stories and illustrative stories not only in religion but in family and country; we talked about postures and liturgical stuff; we talked about music and their desire to be part of the music and to assist around the altar; we talked about their relationships with their teachers and priests and choir and youth directors and friends.  We talked about moral and theological questions - why we don't make fun of others, why we tolerate opinions different from ours, why we go to church every Sunday whether other people do or not (and then why we are not "superior" because of that), why did God tell Abraham to kill Isaac, what's up with the Virgin Birth and the Holocaust.

Today, my younger son and I went to church and lunch together, with him driving; my husband is taking our older son back to college this weekend.  At lunch the waiter greeted us, asked about the others, brought us our tea, and Soula came over to give us a hug and say how she missed me over the holidays but knew I was working at church.  My son and I talked about his confirmation class on the Old Testament and how he was glad that he knew a lot of it already but also learned something new.  Just like we always do.

I am eternally grateful for the church that nurtured me and my family as we have grown in stature/girth/age as well as in our faith.  I am glad that I still occasionally get to participate in Sunday mornings there.  I am also truly grateful for our restaurant family in whose bosom we have been nurtured in another but also important way.  Relationship is what we all live for - to be connected to one another, to be known, to be welcomed, to be missed, to be fed.