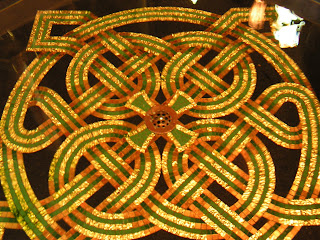 is the hobgoblin of little minds, adored by little statesmen and philosophers and divines.

So saith Ralph Waldo Emerson in his essay "Self Reliance."  Are high school students still required to read and exegete this, I wonder?  Certainly I was in love with Emerson, Thoreau, Whitman, Fuller as a young adult on a quest for a the meaning of life and a blueprint for living.  Solitude, self-reliance, romanticism, nature, thinking, linking the self to the higher stream of knowledge and philosophy and yet also to the woods and the birds and finally the self within both the material world and the world of idea(l)s.... this is what fuels the passion of many a young person, is it not?  It was for me, at least.

Whatever else I now think about American transcendentalism (for instance, I no longer want to go and live in the woods for a year by myself although the beach might be nice), these words of Emerson have stuck with me all my life.  Just in the way that many forget that it is "the love of money" and not just "money" that is the root of all evil, so many forget that the operative word here is "foolish."  Consistency is not a bad thing.  But being consistent for the sake of being consistent, when it comes to having to re-arrange the facts or adjust the lens so that one never evolves, never progresses, never changes, never sees the error of one's ways, never recognizes nuance, never grows - this is not only foolish, it is a waste and a tragedy.

We wrestle with this all the time.  In the public/political sphere, there is constant finger pointing about how this politician or that one "waffles."  Last month you said this but now this month you say that!  We can't trust this guy!  Does this guy see a nuance that we refuse to see?  Has he (or she - "guy" or at least "you guys" can be a gender neutral term - depending on how one uses it of course!) actually considered the two situations and concluded that a different response is needed to this one than was to that one?  Or has she (just in case you don't buy the gender neutrality opinion ventured above) been slimed, seeing as how this and that are really apples and oranges?

A current wrestling is about Al Jazeera.  Many considered the Arabic news network to be the bad guys during the first few years of the Iraq War; their coverage contradicted what American and British governments were saying about what was happening in Iraq.  Now Americans in record numbers are glued to the English language live feed from Al Jazeera to watch (and many to cheer) what is happening in Egypt as protesters clash with police and military as the people call for government reform.

Is it Al Jazeera that has changed, or have people been able to see its work differently in this situation?

This is something we all have to work through and deal with, whether we are public figures or Joe/Jane in the street.  In these days of information overload, we understandably wish to sift through information and gather it into a size we can grasp and understand, but then we risk making it too small, losing the nuances AND the big picture in order to have something neat and orderly to carry around with us.  We being to rely on labels without actually paying attention to the whole; we don't read the book but retweet the scathing review by someone of "our party;" we grasp the elephant's tail and proclaim that elephants are like ropes.

And so a foolish consistency is a hobgoblin which threatens to diminish us as people and as a people and especially as God's people, to make us little, mean, petty, legalistic, casuistic.

What is consistent is God's love.  Of that we may be certain, even as we struggle to see and make sense of how God is working in the world today.

Email Post
Labels: For those who influence public opinion growth politics The Church